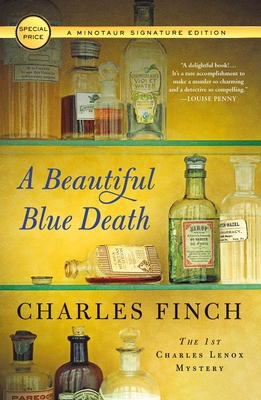 This is book number 1 in the Charles Lenox Mysteries series.

Charles Lenox, Victorian gentleman and armchair explorer, likes nothing more than to relax in his private study with a cup of tea, a roaring fire and a good book. But when his lifelong friend Lady Jane asks for his help, Lenox cannot resist the chance to unravel a mystery.

Prudence Smith, one of Jane's former servants, is dead of an apparent suicide. But Lenox suspects something far more sinister: murder, by a rare and deadly poison. The grand house where the girl worked is full of suspects, and though Prue had dabbled with the hearts of more than a few men, Lenox is baffled by the motive for the girl's death.

When another body turns up during the London season's most fashionable ball, Lenox must untangle a web of loyalties and animosities. Was it jealousy that killed Prudence Smith? Or was it something else entirely? And can Lenox find the answer before the killer strikes again—this time, disturbingly close to home?

*BONUS CONTENT: This edition of A Beautiful Blue Death includes a new introduction from the author and a discussion guide

Charles Finch is the USA Today bestselling author of the Charles Lenox mysteries, including The Vanishing Man. His first contemporary novel, The Last Enchantments, is also available from St. Martin's Press. Finch received the 2017 Nona Balakian Citation for Excellence in Reviewing from the National Book Critics Circle. His essays and criticism have appeared in the New York Times, Slate, Washington Post, and elsewhere. He lives in Los Angeles.

“A delight book! . . . Charles Finch brings early Victorian England right into our homes, peppered with cucumber sandwiches and bodies. . . . It's a rare accomplishment to make a murder so charming and a detective so compelling.” —Louise Penny

“A fine specimen of the genre…. Particularly good is [Finch's] delineation of Lenox's cozy-but-proper relationship with Lady Jane.” —The Washington Post

“The best sort of historical mystery—clever, charming, full of period detail, and a delight to read.” —David Liss, author of The Whiskey Rebels

“Vividly capturing the essence of Victorian England, Finch presents us with a unique sleuth who combines the deductive powers of Sherlock Holmes with the people skills of Thomas Pitt. A sparkling achievement.” —Library Journal (starred review)