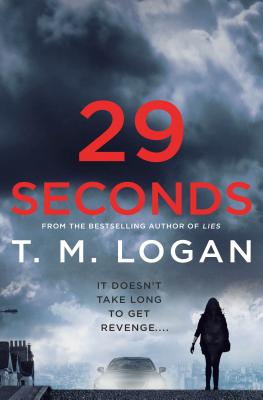 From T.M. Logan, the bestselling author of Lies, comes 29 Seconds, a sensational new thriller that explores what happens when a split second thought of revenge takes on a life of its own.

“Give me one name. One person. And I will make them disappear.”

Sarah is a young professor struggling to prove herself in a workplace controlled by the charming and manipulative Alan Hawthorne. A renowned scholar and television host, Hawthorne rakes in million-dollar grants for the university where Sarah works—so his inappropriate treatment of female colleagues behind closed doors has gone unchallenged for years. And Sarah is his newest target.

When Hawthorne's advances become threatening, Sarah is left with nowhere to turn. Until the night she witnesses an attempted kidnapping of a young child on her drive home, and impulsively jumps in to intervene. The child’s father turns out to be a successful businessman with dangerous connections—and her act of bravery has put this powerful man in her debt. He gives Sarah a burner phone and an unbelievable offer. A once-in-a-lifetime deal that can make all her problems disappear.

No consequences. No traces. All it takes is a 29-second phone call.

Because everyone has a name to give. Don’t they?

T. M. Logan, the bestselling author of LIES, was born in Berkshire to an English father and a German mother. He studied at Queen Mary and Cardiff universities before becoming a national newspaper journalist. He currently works in communications and lives in Nottinghamshire with his wife and two children.

“Logan spins out suspense to the final pages in this timely #MeToo thriller.” —Booklist

“A tense and gripping thriller.” —B.A. Paris, bestselling author of Behind Closed Doors

“Just when you think things can’t possibly get worse...they do. And then some. Lies is positively riveting, from the captivating first scene to the shocking twist at the end.”
—Sandra Brown, #1 New York Times bestselling author of Seeing Red

“A tense suspense thriller with a surprising and satisfying ending, a whodunit of the best kind as it twists and turns…Lies will keep you guessing until the very end.” —Shelf Awareness

"Logan's debut races readers through a fast-moving joyride of nerve-wracking suspense and intrigue that will challenge and surprise even the most devout enthusiasts of psychological thrillers."—Library Journal

“Gripping…full of expected twists and turns, this psychological thriller will leave readers eager for Logan’s next book.”—Publishers Weekly

“British journalist Logan's first foray into crime fiction is an adrenaline-fueled page-turner that explores the fragility of domestic bliss.”—Kirkus Reviews