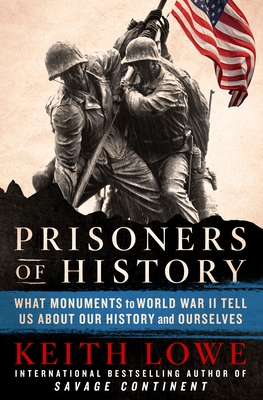 A look at how our monuments to World War II shape the way we think about the war by an award-winning historian.

Keith Lowe, an award-winning author of books on WWII, saw monuments around the world taken down in political protest and began to wonder what monuments built to commemorate WWII say about us today. Focusing on these monuments, Prisoners of History looks at World War II and the way it still tangibly exists within our midst. He looks at all aspects of the war from the victors to the fallen, from the heroes to the villains, from the apocalypse to the rebuilding after devastation. He focuses on twenty-five monuments including The Motherland Calls in Russia, the US Marine Corps Memorial in the USA, Italy’s Shrine to the Fallen, China’s Nanjin Massacre Memorial, The A Bomb Dome in Hiroshima, the balcony at Yad Vashem in Jerusalem and The Liberation Route that runs from London to Berlin.

Unsurprisingly, he finds that different countries view the war differently. In monuments erected in the US, Lowe sees triumph and patriotic dedications to the heroes. In Europe, the monuments are melancholy, ambiguous and more often than not dedicated to the victims. In these differing international views of the war, Lowe sees the stone and metal expressions of sentiments that imprison us today with their unchangeable opinions. Published on the 75th anniversary of the end of the war, Prisoners of History is a 21st century view of a 20th century war that still haunts us today.

Keith Lowe is the award-winning author of Savage Continent: Europe in the Aftermath of World War II, and the critically acclaimed history Inferno: The Fiery Devastation of Hamburg, 1943. He is widely recognized as an authority on the Second World War, and has often spoken on TV and radio, both in Britain and the United States. He was an historical consultant and one of the main speakers in the PBS documentary The Bombing of Germany, which was also broadcast in Germany. His books have been translated into several languages, and he has lectured in Britain, Canada and Germany. He lives in North London with his wife and two kids.

"Compelling...powerful...[Lowe] looks at the ways in which a diverse set of countries have memorialized that bloody conflict, which set the stage for the world in which we still live... What Prisoners of History does do—and does well—is explain why groups in each country built the monuments in the first place and how changes in politics and international relations affected interactions with them afterward." —Wall Street Journal

"Thought-provoking . . . a perceptive and persuasive call for remembering the tragedies and triumphs of the past." —Publishers Weekly

“The well-balanced range here enables the retelling of some remarkable war stories, while also providing fascinating insights into the ways different nations have remembered or denied issues around national identity and the glory and horrors of war . . . this is some of the most thought-provoking writing about the Second World War.”
—Spectator Magazine

“In this timely book, which neatly combines history, art criticism, and travelogue . . . Lowe is a fine guide to these monuments because he feels the moral force—for good or bad—of each site he visits.”
—The Times (UK)

"[Lowe’s] examples might rightly raise some hackles . . . Insightful accounts of memorials where there is usually more than meets the eye." —Kirkus Reviews