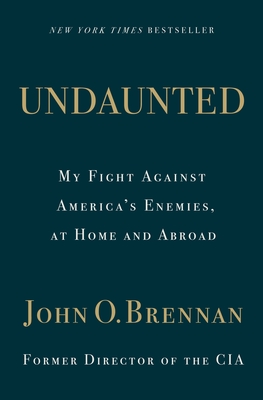 "John Brennan is one of the hardest-working, most patriotic public servants I've ever seen, and our country is better off for it. As president, he was one of my closest advisors and a great friend. And in his memoir, Undaunted, you'll see why. I hope you'll read it."
—President Barack Obama

A powerful and revelatory memoir from former CIA director John Brennan, spanning his more than thirty years in government.

Friday, January 6, 2017: On that day, as always, John Brennan’s alarm clock was set to go off at 4:15 a.m. But nothing else about that day would be routine. That day marked his first and only security briefing with President-elect Donald Trump. And it was also the day John Brennan said his final farewell to Owen Brennan, his father, the man who had taught him the lessons of goodness, integrity, and honor that had shaped the course of an unparalleled career serving his country from within the intelligence community.

In this brutally honest memoir, Brennan, the son of an Irish immigrant who settled in New Jersey, describes the life that took him from being a young CIA recruit enamored with the mystique of spy work, secretly defiant enough to drive a motorcycle and sport a diamond earring, and invigorated by his travels in the Middle East to being the most powerful individual in American intelligence. He details his experiences with very different presidents and what it’s been like to bear responsibility for some of the nation’s most crucial and polarizing national security decisions.

He pulls back the curtain on the inner workings of the Agency, describing the selfless, patriotic, and invisible work of the women and men involved in national security. He also examines the insularity, arrogance, and myopia that have, at times, undermined its reputation in the eyes of the American people and of members of other branches of government. Through topics ranging from George W. Bush’s intervention in Iraq to his thoughts on the CIA’s controversial use of enhanced interrogation techniques to his eye-opening account of the planning of the raid that resulted in Bin Ladin’s death to his realization that Russia had interfered with the 2016 election, Brennan brings the reader behind the scenes of some of the most crucial moments in recent U.S. history. He also candidly discusses the times he has failed to live up to his own high standards and the very public fallouts that have resulted. With its behind-the-scenes look at how major U.S. national security policies and actions unfolded during his long and distinguished career—especially during his eight years in the Obama administration—John Brennan’s memoir is a work of history with strong implications for the future of America and our country’s relationships with other world powers.

Undaunted: My Fight Against America’s Enemies, at Home and Abroad offers a rare and insightful look at the often-obscured world of national security, the intelligence profession, and Washington’s chaotic political environment. But more than that, it is a portrait of a man striving for integrity; for himself, for the CIA, and for his country.

John O. Brennan was one of President Obama's most trusted national security advisors during all eight years of the Obama Administration, first as assistant to the president for homeland security and counterterrorism and then as director of the Central Intelligence Agency. Mr. Brennan had previously worked in the CIA from 1980 to 2005, where he specialized in Middle Eastern affairs and counterterrorism and served as President Clinton's daily intelligence briefer. Mr. Brennan received a bachelor's degree in political science from Fordham University in 1977 and a master's degree in government from the University of Texas at Austin in 1980.

"John Brennan is one of the hardest-working, most patriotic public servants I've ever seen, and our country is better off for it. As president, he was one of my closest advisors and a great friend. And in his memoir, Undaunted, you'll see why. I hope you'll read it."
—President Barack Obama

"Brennan’s memoir presents a rich portrait of his unusual life, which took him from a working-class New Jersey neighborhood to a position as a Middle East specialist who met with kings and presidents and witnessed the rise of Al Qaeda...[His] reflections on his long and momentous career are a worthy addition to the available history of the post-9/11 era."
—The New York Times (Editors' Choice)

"It’s a full Brennan, from beginning to end. This is a headstrong and unapologetic book, one whose author tells us what he really thinks."
—The Washington Post