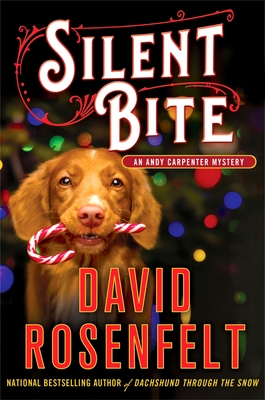 This is book number 22 in the An Andy Carpenter Novel series.

Andy Carpenter and his golden retriever, Tara, are finding that all is not calm or bright in Silent Bite, the latest Christmas mystery in this heartwarming series from bestselling author David Rosenfelt.

Lawyer Andy Carpenter can finally take a breath; he’s back on dry land after a family Caribbean cruise forced on him by his wife, Laurie, to get into the Christmas spirit. Of course the family’s first stop is to the Tara Foundation, the dog rescue organization that has always been Andy’s true passion.

But when Andy arrives, his partner, Willie Miller, needs his help. Willie’s old cellmate, Glenn Anson, has been arrested for murder. Andy doesn’t necessarily believe in Glenn, but Willie does. And Andy believes in Willie, which is why Andy decides to take the case.

Once again David Rosenfelt puts readers in the Christmas spirit in a tale that is equal parts mystery and holiday cheer.