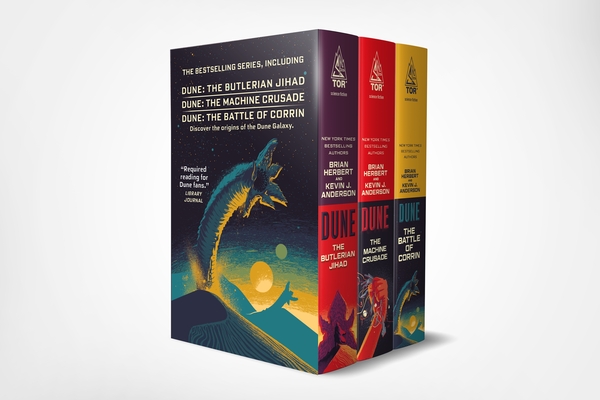 Frank Herbert's original Dune series is one of the great creations of imaginative literature, science fiction's answer to The Lord of the Rings. The Legends of Dune trilogy, written based on Frank Herbert's own notes, reveals a vital chapter of the saga, 10,000 years before the classic Dune sequence begins.

Throughout the Dune novels, Frank Herbert frequently referred to the war in which humans wrested their freedom from "thinking machines." In this first book, the story of that war comes tantalizingly to life. Finally, we see how Serena Butler's passionate grief ignites the struggle that will liberate humans from their machine masters. Here is the amazing tale of the Zensunni Wanderers, who escape bondage to flee to the desert world where they will declare themselves the Free Men of Dune.

More than two decades have passed since the events chronicled in Dune: The Butlerian Jihad. The crusade against thinking robots has ground on for years, but the forces led by Serena Butler and Irbis Ginjo have made only slight gains; the human worlds grow weary of war, of the bloody, inconclusive swing from victory to defeat. Here is the unrivaled imaginative power that has put Brian Herbert and Kevin Anderson on bestseller lists everywhere and earned them the high regard of readers around the globe.

Dune: The Battle of Corrin

It has been fifty-six hard years since the events of Dune: The Machine Crusade. Following the death of Serena Butler, the bloodiest decades of the Jihad take place. Synchronized Worlds and Unallied Planets are liberated one by one, and at long last, after years of victory, the human worlds begin to hope that the end of the centuries-long conflict with the thinking machines is finally in sight.

Praise for the Dune novels of Brian Herbert and Kevin J. Anderson:

“The kind of intricate plotting and philosophical musings that would make the elder Herbert proud….Throughout, key revelations regarding the Zensunni Wanderers and their fight for freedom and other historical Dune elements lend an air of discovery to this fast-paced tale.” –Publishers Weekly (starred review) on Dune: The Butlerian Jihad


“This compelling saga of men and women struggling for their freedom is required reading for Dune fans and an essential purchase for libraries.” –Library Journal on Dune: The Butlerian Jihad