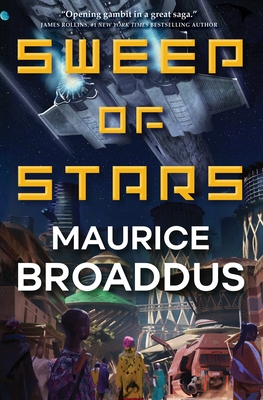 Maurice Broaddus's Sweep of Stars is the first in a trilogy that explores the struggles of an empire. Epic in scope and intimate in voice, it follows members of the Muungano empire – a far-reaching coalition of city-states that stretches from O.E. (original earth) to Titan – as it faces an escalating series of threats.

"The beauty in blackness is its ability to transform. Like energy we are neither created nor destroyed, though many try." - West African Proverb

The Muungano empire strived and struggled to form a utopia when they split away from old earth. Freeing themselves from the endless wars and oppression of their home planet in order to shape their own futures and create a far-reaching coalition of city-states that stretched from Earth and Mars to Titan.

With the wisdom of their ancestors, the leadership of their elders, the power and vision of their scientists and warriors they charted a course to a better future. But the old powers could not allow them to thrive and have now set in motion new plots to destroy all that they've built.

In the fire to come they will face down their greatest struggle yet.

Amachi Adisa and other young leaders will contend with each other for the power to galvanize their people and chart the next course for the empire.

Fela Buhari and her elite unit will take the fight to regions not seen by human eyes, but no training will be enough to bring them all home.

Stacia Chikeke, captain of the starship Cypher, will face down enemies across the stars, and within her own vessel, as she searches for the answers that could save them all.

The only way is forward.

MAURICE BROADDUS is a fantasy and horror author best known for his short fiction and his Knights of Breton Court novel trilogy. He has published dozens of stories in magazines and book anthologies, including in Asimov's Science Fiction, Black Static, and Weird Tales.

Broaddus was born in London, but grew up in Indianapolis. His mother is from Jamaica, where she and many of his relatives still live.

“Takes off with an epic array of characters and plotlines that will enmesh readers in the politics and power struggles set across the stars.”—Library Journal, starred review

“Launches readers into the heart of an interplanetary struggle.... With plenty of fascinating characters faced with steering their empire through threats internal and external, Sweep of Stars will leave readers eager for the next entry in this series. Discover: The thrilling Black Astra trilogy kicks off with an array of intriguing characters, each of whom faces threats from across the solar system and beyond.”—Shelf Awareness, starred review

“Richly detailed and intricately plotted … will draw in readers of epic science fiction.”—Booklist

“The Astra Black series promises to clear a wide field for dreaming and action that can be truly transformative. Sweep of Stars is the brilliant beginning of a major series ” —Sci Mind