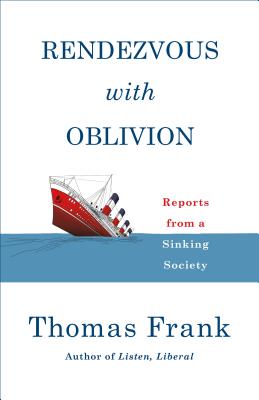 By Thomas Frank
Email or call for price
Hard to Find

I've read much of what Thomas Frank has published (What's the Matter with Kansas; Pity the Billionaire; & Listen, Liberal) and his latest collection of essays didn't disappoint. I laughed out loud at "The Animatronic Presidency" (a look at recent presidential libraries), and "Academy Fight Song" (about the changing nature of American universities). But it's political essays like "Bully Pulpit", "The Powers That Were", and "America Made Great Again" that I'll remember most. Read it and get angry!

From the acclaimed author of Listen, Liberal and What’s the Matter with Kansas, a scathing collection of his incisive commentary on our cruel times—perfect for this political moment

What does a middle-class democracy look like when it comes apart? When, after forty years of economic triumph, America’s winners persuade themselves that they owe nothing to the rest of the country?

With his sharp eye for detail, Thomas Frank takes us on a wide-ranging tour through present-day America, showing us a society in the late stages of disintegration and describing the worlds of both the winners and the losers—the sprawling mansion districts as well as the lives of fast-food workers.

Rendezvous with Oblivion is a collection of interlocking essays examining how inequality has manifested itself in our cities, in our jobs, in the way we travel—and of course in our politics, where in 2016, millions of anxious ordinary people rallied to the presidential campaign of a billionaire who meant them no good.

These accounts of folly and exploitation are here brought together in a single volume unified by Frank’s distinctive voice, sardonic wit, and anti-orthodox perspective. They capture a society where every status signifier is hollow, where the allure of mobility is just another con game, and where rebellion too often yields nothing.

For those who despair of the future of our country and of reason itself, Rendezvous with Oblivion is a booster shot of energy, reality, and moral outrage.

Thomas Frank is the author of Listen, Liberal, Pity the Billionaire, The Wrecking Crew, and What's the Matter with Kansas? A former columnist for The Wall Street Journal and Harper's, Frank is the founding editor of The Baffler and writes regularly for The Guardian. He lives outside Washington, D.C.
My Account • Sign In • Sign Out • Register
NEW & USED BOOKS
AUTHOR EVENTS • GIFTS
Tempe
6428 South McClintock Drive
480.730.0205
[Google Map]
10am-7pm daily
Trade Counter 11am-6pm daily