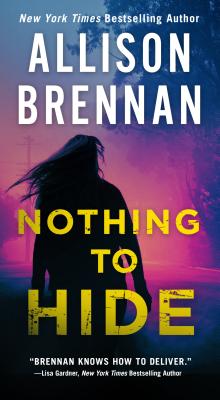 This is book number 15 in the Lucy Kincaid Novels series.

New York Times bestselling Allison Brennan's series featuring FBI Agent Lucy Kincaid continues as she finds herself on the trail of a serial killer in Nothing to Hide.

“BRENNAN [IS] A MASTER.”
—Associated Press

With a background in psychology, FBI Agent Lucy Kincaid is good at getting into the heads of killers and victims both. Still, her latest case is leaving her stumped. A third body has turned up in San Antonio—and it bears the same unique and troubling M.O. as the first two. The killer is clearly trying to send a message. But what is it—and to whom? All roads keep leading Lucy down a dead end. . .

The victims are all married men who led honest lives alongside their adoring wives, but have nothing else in common. When Lucy catches each widow in a lie, she realizes that things are not at all as they seem. What begins as a seemingly straightforward investigation turns into something far darker and more sinister than Lucy could have ever imagined. Can she solve this case before more lives are lost. . . including her own husband?

Allison Brennan is the New York Times and USA Today bestselling author of over thirty novels, including the Max Revere Novels (Abandoned, Shattered) and the Lucy Kincaid Novels (Cut and Run, Nothing to Hide) She was nominated for Best Paperback Original Thriller by the International Thriller Writers and is a two-time winner of the Daphne du Maurier Award by Kiss of Death.