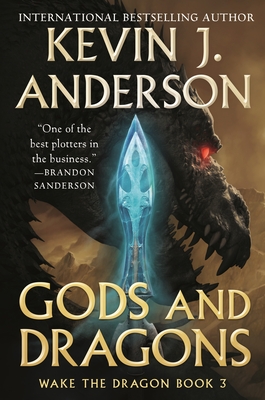 Co-author of the Dune sequels, Kevin J. Anderson's Gods and Dragons marks his triumphant return to epic fantasy, featuring a politically charged adventure of swords, sorcery, vengeance, and the awakening of sleeping giants.

Two continents at war: the Three Kingdoms and Ishara have been in conflict for a thousand years. But when an outside threat arises—the reawakening of a powerful ancient race that wants to remake the world—the two warring nations must somehow set aside generations of hatred to form an alliance against a far more deadly enemy.

Praise for Gods and Dragons:

“The well-developed characters and frequent heart-racing action keep the pages flying, and Anderson expertly ties the intricate story lines together on the way to a thrilling and surprisingly moving conclusion. Readers will be wowed.”—Publishers Weekly, starred review

“Shelf-bending fantasy that is action-packed, intricately plotted, and breakneck paced.... The numerous threads eventually meet in an earth-shattering bloodbath of a final conflict that will have fans of George R.R. Martin’s A Song of Ice and Fire standing up and applauding.”—Kirkus Reviews

Praise for the Wake the Dragon series:

“Kevin J.Anderson is one of the best plotters in the business.” —Brandon Sanderson

“A brisk and engaging narrative.” —Booklist

“The pages turn almost by themselves, because you absolutely, categorically have to find out what happens next.” —Kirkus Reviews