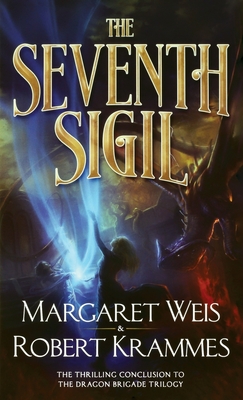 Margaret Weis and co-author Robert Krammes bring the enthralling Dragon Brigade trilogy to a thrilling conclusion in The Seven Sigil, a sweeping novel of worldwide war and personal redemption.

Five hundred years ago, a clan of rebels was banished to the bottom of the enchanted world of Aeronne; ever since, these Bottom Dwellers have sought revenge, and now they are waging all-out war on the rest of humanity. Their deadly "contramagic" beams destroy buildings and attack naval airships, and their demonic drumming brings terrible storms and disrupts the magic of the people and dragons Above. The attack of their full contramagic power will create a magical armageddon.

In an effort to prevent further death, Captain Stephano de Guichen leads the Dragon Brigade, taking the fight to the Bottom. But strength of arms alone will not be enough to conquer their foe.

As the Bottom Dwellers' blood magic eats away at the world, those Above realize their only possible defense lies in the heretical secrets of contramagic. Loyal priests must decide whether to protect the Church, or risk its destruction in pursuit of the truth.

Only the Dragon Brigade can prevent an endless dark age. Their epic battle will test the mettle of those thrown into the breach, and determine the fate of this magical world.

MARGARET WEIS is the longtime world-wide bestselling co-creator and co-author of The Dragonlace Chronicles, and recently, the Dragon Brigade trilogy. She worked at TSR, Inc., as a book editor for thirty years. She also is a publisher of role-playing games, including major franchises such as Serenity (Firefly) and Smallville.

ROBERT KRAMMES is a game designer and the general manager at Aztec Video Productions. He is the author of the Dragon Brigade Series along with Margaret Weis. He lives in Cincinnati, Ohio.

“Veteran storyteller Weis and her cowriter continue the saga begun in Shadow Raiders with this tasty mix of epic fantasy and swashbuckling action that should please fans of dragon-based fiction.” —Library Journal on Shadow Raiders

“A very solid piece of epic fantasy, with conspiracy and plotting as well as a great deal of action, Storm Riders carries on an entertaining story to a cliff-hanger that guarantees readers will want the next volume.” —Booklist on Shadow Raiders