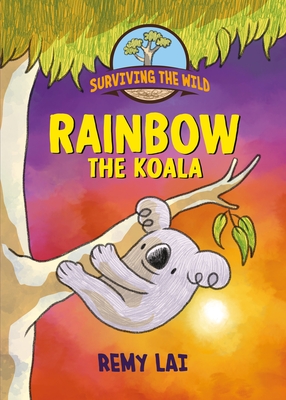 "A heartening and pensive story, told through irresistibly charming art, Star the Elephant is an utter delight." —John Patrick Green, New York Times-bestselling creator of InvestiGators, on Star the Elephant

Rainbow the Koala is ready to go off and live on his own—or so his mom says. But Rainbow is scared! The kookaburra bird cackles at him and he struggles to find a tree to call his home. As scorching heat takes hold and Rainbow runs out of water, he'll soon face his most dangerous test: surviving a bush fire.

Remy Lai studied fine arts, with a major in painting and drawing. She was born in Indonesia, grew up in Singapore, and currently lives in Brisbane, Australia, where she writes and draws stories for kids with her two dogs by her side. She is the author of the critically-acclaimed Pie in the Sky, Fly on the Wall, and Pawcasso.

"Though high on the adorable factor, this is also a ­powerful, stirring ­example of the ­devastating impact of climate change." —School Library Journal, starred

"A heartening and pensive story, told through irresistibly charming art, Star the Elephant is an utter delight." —John Patrick Green, New York Times-bestselling creator of InvestiGators, on Star the Elephant

"Gorgeously drawn and bursting with charm, adventure, and tenderness. . . Star the Elephant is a pure delight for young readers." —Jonathan Stutzman, author of Llama Destroys the World, on Star the Elephant

Fly on the Wall

A Best Book of the Year for Kirkus, Booklist, Chicago Public Library, and School Library Journal!

“Funny, enthralling, and a great reminder that being a little odd isn’t a bad thing.” —Kayla Miller, author of Click and Camp

"Bright, funny storytelling . . . in this sharp, sweet story there is much to connect with." —The New York Times Book Review

* "Near-misses and laugh-out-loud moments abound, which will endear it to readers who like 'Big Nate' and 'Wimpy Kid.'" —School Library Journal, starred review

Pie in the Sky

Winner of the Sid Fleischman Award for Humor!