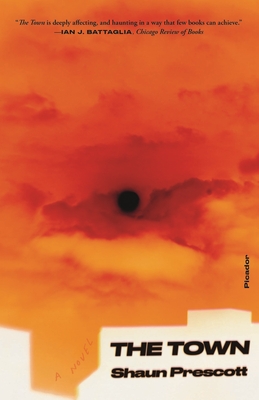 "A powerfully doomy debut" (The Guardian), Shaun Prescott’s The Town is a novel of a rural Australian community besieged by modern day anxieties and threatened by a supernatural force seeking to consume the dying town.

This is Australia, an unnamed, dead-end town in the heart of the outback—a desolate place of gas stations, fast-food franchises, and labyrinthine streets: flat and nearly abandoned. When a young writer arrives to research just such depressing middles-of-nowhere as they are choked into oblivion, he finds something more sinister than economic depression: the ghost towns of Australia appear to be literally disappearing. An epidemic of mysterious holes is threatening his new home’s very existence, and this discovery plunges the researcher into an abyss of weirdness from which he may never escape.

Dark, slippery and unsettling, Shaun Prescott’s debut resurrects the existential novel for the age of sprawl and blight, excavates a nation’s buried history of colonial genocide, and tells a love story that asks if outsiders can ever truly belong anywhere. The result is a disquieting classic that vibrates with an occult power.

Shaun Prescott is a writer based in the Blue Mountains in New South Wales. The author of The Town, he has self-released several small books of fiction, including Erica from Sales and The End of Trolleys, and has been the editor of Crawlspace Magazine. His writing has appeared in The Lifted Brow, The Guardian, and Meanjin, among other venues.

"The Town is an impressive debut; perhaps most so for how Prescott maintains its singular and beguiling mood for the entirety of the novel—part comic satire, part existential horror. Prescott effectively conveys the sense that history and art seem incapable of reflecting the calamity of our present moment." —Zach Ravas, zyzzyva

"A bizarre novel—A seance for Kafka, Walser and Calvino. Shaun Prescott has written an ominous work of absurdity." —Catherine Lacey, author of Nobody is Ever Missing and The Answers

"The Town moves with a gentle command amid the obvious reference points of Calvino, Kafka and Ave, but it also invokes the less-celebrated novels of Steve Erickson and Rex Warner. Like them, Prescott seeks the universal in a meticulous paraphrase of the here and now, and finds the dislocation hiding in locality to show us just how lost we really may be." —Jonathan Lethem, author of Motherless Brooklyn and The Fortress of Solitude

"The Town really got under my skin. There's a deceptive lightness to Prescott's style, so this is a book that creeps up on the reader: all of a sudden you're swept away by, even bound to, this thing that's so mournful, intense and unsettling. It will stay with me." —Lisa McInerney, author of The Blood Miracles

"Shaun Prescott's debut novel is a dense singularity, an exploration of the idea of nowhere as the centre of the world, and a stark paean to loneliness, entropy and marginal existence—sustained by the kind of slow, luminous prose that feels like the equivalent of staring straight into the sun." —David Keenan, author of England's Hidden Reverse

"A gentle, if gnawing, safari of the existential dread on which Australia is built." —The Saturday Paper (Australia)