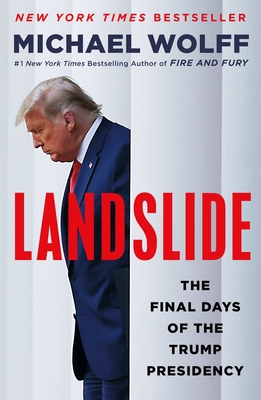 “I inhaled Landslide, gobbled it up.” —Slate

Wolff embedded himself in the White House in 2017 and gave us a vivid picture of the pandemonium that had descended on Washington. Almost four years later, Wolff finds the Oval Office even more chaotic and bizarre.

At all times of the day, Trump is surrounded by schemers and unqualified sycophants who spoon-feed him the “alternative facts” he hungers to hear—about COVID-19, Black Lives Matter protests, and, most of all, his chance of winning reelection. Wolff takes us front row as the president reaches beyond the bounds of democracy as he entertains the idea of martial law and balks at calling off the January 6 insurrectionist mob.

As the Trump presidency’s hold over the country spiraled out of control, an untold and human account of desperation, duplicity, and delusion was unfolding within the West Wing. Landslide is that story as only Michael Wolff can tell it.

Michael Wolff is the author of several books about the Trump White House: Fire and Fury, Siege, and Landslide. His other books include a biography of Rupert Murdoch, The Man Who Owns the News, and his memoir of the early internet years, Burn Rate. He has been a regular columnist for New York magazine, Vanity Fair, British GQ, the Hollywood Reporter, and the Guardian. The winner of two National Magazine Awards, he lives in New York City with his family.

“Two new books about the final year of Donald J. Trump’s presidency are entering the cultural bloodstream. The first, Landslide, by the gadfly journalist Michael Wolff, is the one to leap upon. . . . Landslide is a smart, vivid and intrepid book. He has great instincts. I read it in two or three sittings. It’s the book that this era and this subject probably deserve.”
—Dwight Garner, The New York Times

“The strength of Landslide comes less from these stories and more from a coherent argument that Wolff, in partnership with his sources, makes about how we should understand the period between Nov. 3 and Jan. 20. Most quickly produced books about political events don’t do that.”
—Nicholas Lemann, The New York Times

“First there was Fire and Fury, then there was Siege, now there is Landslide. The third is the best of the three, and that is saying plenty.”
—The Guardian

“[Wolff's] narrative tends to be more entertaining, sailing swiftly ahead where others tend to grind. . . . All good stories are rich in colorful characters, whether seen as good guys or bad, and Wolff gives us a gallery that does not disappoint.”
—Ron Elving, NPR

“I inhaled Landslide, gobbled it up.”
—Slate

“The world was waiting for a new Hunter Thompson. And in Michael Wolff it has found him. . . . He provides a seamless, cinematic narrative of unfolding events in the White House, as if he was quietly sitting in the corner, unnoticed, taking notes, with some preternatural insight into the innermost thoughts of all the protagonists. Cruel, unforgiving, muckraking, scandalous. I couldn’t stop reading it.”
—The Telegraph

“Wolff’s previous books on this president — Fire and Fury and Siege — titillated us with inside tales from a dysfunctional White House; terrified us a bit with gut-wrenching episodes of Diet Pepsi-fuelled craziness. They were warm-up acts. Low energy in comparison. Now we get the real deal. Landslide cuts deeper than any previous book about this president, indeed about any president.”
—The Times of London

“Wow. Just wow. . . . If Donald Trump seems like a distant, bad dream, Michael Wolff’s pacily readable account of his last months as president warns that we shouldn’t write him off yet. It’s a vivid portrait of a regime governed by chaos and venal favouritism, where trusted staffers could become bitter enemies in a moment, and you could gain the President’s ear if he saw and liked you on TV.”
—Evening Standard