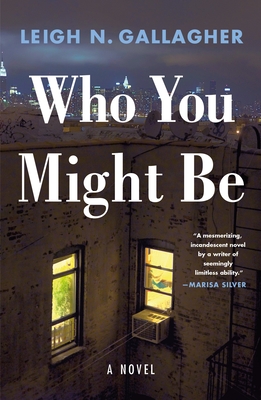 “Dazzling...Who You Might Be is a brilliant, splintery coming-of-age novel that perfectly captures the nervous thrum of adolescence and the unnerving fragility of adulthood. Gallagher is so acutely attuned to the lies (and secrets) we tell (and keep from) ourselves and others. It puts me in mind of Emma Cline and Rachel Kushner.”—Award-winning author Peter Ho Davies

A fiercely original and propulsive debut novel about the unexpected turns in life that ultimately determine who we become.

It’s the late nineties—the dawn of the internet—and Judy and Meghan have lied to their mothers and run away for the weekend, to see a girl they’ve met in a chat room. Meanwhile, twelve-year-old Cassie, desperately clinging to childhood hopes, travels deep into the Nevada desert to reunite with her real mother at a strange and isolated compound. And, across the country, Caleb, an entitled teenager, is miserable following his family’s move from upper-crust San Francisco to boring Ann Arbor—until, emboldened by privilege, his tours of blighted Detroit become graffiti-writing escapades, with his faithful little brother in tow.

Each of these adventures derails in severe, alarming ways, only to resurface and collide two decades later in an unforgettable finale that explores the power—and limits—of the narratives that come to define us. Deftly written and peopled with precisely drawn, indelible characters pushed to great extremes, Leigh N. Gallagher's Who You Might Be considers the ramifications of life’s most trying encounters and the resilience it takes to determine for ourselves who we might be.

Leigh N. Gallagher’s work has been published in American Short Fiction, Beloit Fiction Journal, Salt Hill, and the Reading Room anthology, and in non-traditional formats through collaborations with artists and musicians. She holds an MFA from the University of Michigan, and her writing has received support from many organizations, including the Helene Wurlitzer Foundation of New Mexico, the Vermont Studio Center, and Marble House Project. Originally from California, she lives in Philadelphia. Who You Might Be is her first novel.

"[A] fast-paced debut novel...[that] asks what it really means for people to define themselves."
—The New York Times Book Review

“Dazzling...Who You Might Be is a brilliant, splintery coming-of-age novel that perfectly captures the nervous thrum of adolescence and the unnerving fragility of adulthood. Gallagher is so acutely attuned to the lies (and secrets) we tell (and keep from) ourselves and others. It puts me in mind of Emma Cline and Rachel Kushner.”
—Peter Ho Davies, author of A Lie Someone Told You About Yourself

“I read Who You Might Be with my heart beating at a different register because I knew I was in the presence of a writer who knows how to match an acrobatic and singular use of language to the density of human complexity. Gallagher enlivens worlds and characters with an observational eye and ear tuned to frequencies most of us don't see and hear.”
—Marisa Silver, author of The Mysteries and Mary Coin