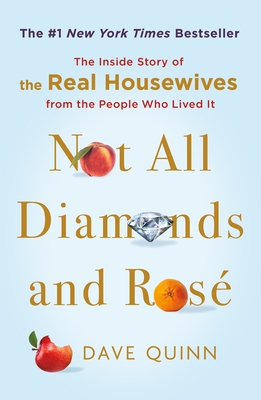 “I like to think of Not All Diamonds and Rosé as the ultimate reunion. I know readers will be surprised, entertained, and even shocked at what’s in store." —Andy Cohen

Dave Quinn's Not All Diamonds and Rosé is the definitive oral history of the hit television franchise, from its unlikely start in the gated communities of Orange County to the pop culture behemoth it has become—spanning nine cities, hundreds of cast members, and millions of fans.

What is it really like to be a housewife? We all want to know, but only the women we love to watch and the people who make the show have the whole story. Well, listen in close, because they’re about to tell all.

Nearly all the wives, producers, and network executives, as well as Andy Cohen himself, are on the record, unfiltered and unvarnished about what it really takes to have a tagline. This is your VIP pass to the lives behind the glam squads, testimonials, and tabloid feuds.

Life’s not all diamonds and rosé, but the truth is so much better, isn’t it?

“This exhaustive oral history features dishy interviews with 185 cast and crew members behind the Bravo phenomenon. Fans will delight to read about how it all got started.”
—New York Post

An entertainment journalist and lifelong Bravo fan since back in the Queer Eye for the Straight Guy days, Dave Quinn has covered the Housewives for outlets like PEOPLE Magazine and Entertainment Weekly. In addition to reviewing reality TV, much of Dave’s career has been spent writing about theater — which, when combined with the Housewives, makes him an expert in drama. He lives in Park Slope, Brooklyn with the only thing worth putting in his will: a ginormous TV.

“[Not All Diamonds and Rosé] spills the tea (or the rosé, if you prefer) on the reality empire with extensive reporting from the series' casts, producers, executives, and more.”
—Entertainment Weekly

“As sweeping as it is scandalous...Fans will drink this up as quickly as the Housewives would a glass of champagne.”
—Publishers Weekly

“This exhaustive oral history features dishy interviews with 185 cast and crew members behind the Bravo phenomenon. Fans will delight to read about how it all got started, which fired housewives are angriest with Andy Cohen — and a shocking, never-before-revealed incident that happened when the New Jersey cast went to Punta Cana. No wonder the book sold out after it was first released.”
—New York Post