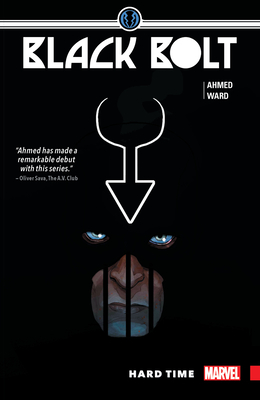 If I didn't already adore Saladin Ahmed, this comic would have been reason enough to start. Reviving the king of the Inhumans, Ahmed does what all great comic writers aspire to do: tells a thrilling story that is as funny as it is heart wrenching, delivering a timely message about humanity through characters that are anything but human. Paired excellently with Christian Ward's art, Black Bolt is also just good fun to read and beautiful to look at. There are so many panels in these first six issues that I'd frame in a heartbeat. Pick it up, you won't regret it.

The silent king of the Inhumans stars in his fi rst-ever solo series! But it begins with Black Bolt...imprisoned?! Where exactly is he? Why has he been jailed? And who could be powerful enough to hold the uncanny Black Bolt? The answers to both will shock you -and Black Bolt as well! For if he is to learn the truth, he must first win a fi ght to the death with a fellow inmate -the Absorbing Man! Award-winning science fi ction writer Saladin Ahmed (Throne of the Crescent Moon) crafts a story as trippy as it is action-packed, with truly mind-bending art from the one-and-only Christian Ward (ODY-C)! COLLECTING: BLACK BOLT 1-6