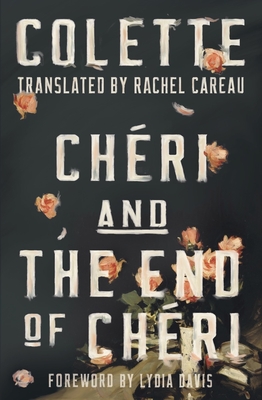 By Colette, Rachel Careau (Translated by), Lydia Davis (Foreword by)
$26.95

An exquisite new translation of Colette’s tragicomic masterpiece, a pair of novels exploring the relationship between an aging courtesan and a much younger man.

Chéri and its sequel, The End of Chéri, mark Colette’s finest achievements in their brilliant, subtle, and frank investigations of love and power. Set in the Parisian demimonde in the last days of the Belle Époque, Chéri tells the story of Léa, a courtesan at the end of a successful career, and her lover, the beautiful but emotionally opaque Chéri. Chéri will soon enter into an arranged marriage, ending their six-year affair, which—they will each realize too late—has been the one real love of their lives.

The End of Chéri picks up their story in the aftermath of the First World War. Chéri, now a decorated soldier, has returned from the trenches to a changed world. Emotionally estranged from his independent and unfaithful wife, a psychically wounded Chéri begins an inexorable descent—one that leads him back to a stunning encounter with Léa.

As the acclaimed writer and translator Lydia Davis puts it in an illuminating foreword, Rachel Careau’s “brilliantly ingenious, close new translation” reveals Chéri and The End of Chéri as “the strangest of love stories.” Colette skillfully portrays her characters’ shifting inner lives and desires amid a clear-eyed depiction of interpersonal power dynamics. Careau’s lean, attentive translation restores to these classic novels their taut, remarkably modern style—the essence of Colette’s genius.

Colette (1873–1954) wrote numerous works, including Gigi, The Vagabond, and the five Claudine novels. She was the first woman elected president of the Académie Goncourt.

Rachel Careau is the recipient of a 2019 National Endowment for the Arts Literature Translation Fellowship. Her translations of Roger Lewinter’s Story of Love in Solitude and The Attraction of Things were published by New Directions in 2016. Her writing and translations have appeared recently in BOMB, Harper’s Magazine, Literary Hub, Plume, and Two Lines. She lives in Hudson, New York.

Rachel Careau’s meticulous and agile translation of this pair of novels brings to Anglophone readers some of Colette’s finest writing, rich in the sensuality for which she is widely known—but also in the sharpness of her social observations, so ahead of her time that they come across as radical even by contemporary standards. Above all, Careau captures the technicality of Colette’s prose. She manages shifts in mood and characterization as well as the complexity of Colette’s sentences—sometimes terse, sometimes richly metaphoric—and she does so in a way that feels at once faithful to the author’s era and utterly timeless.
— Tash Aw - New York Times Book Review

It is so hard to express what is different line-for-line in this new translation of Colette’s classic, but if you could experience the cleaning of a voice, like that of a painting, that might be it. I was left with a new sense of Colette’s self-possession as a writer, all while witnessing, moment for moment, Rachel Careau’s triumph of style.
— Alexander Chee, author of The Queen of the Night

In this new translation of Colette’s two most celebrated novels we seem to be reading her in English for the first time—her prose lean, limpid, and knowingly askew.
— Richard Sieburth, professor emeritus of French literature, thought and culture and comparative literature at New York University

Rachel Careau’s new translations of Chéri and The End of Chéri capture the bone-on-bone feeling of Colette’s prose, sinuous but never florid, precise but generous. Anglophone readers will finally be able to appreciate why Colette is one of the twentieth century’s major writers, and worth so much more than her mythology—or, better yet, they will see why the mythology exists. Chéri and The End of Chéri are edgy and surprising, and knowing, piercing insights into love, desire, and all the mysteries.

— Lauren Elkin, author of Flâneuse and translator of Simone de Beauvoir’s The Inseparables

This is an admirably accurate new translation of two of Colette’s most distinctive and moving novels. With a foreword and introduction that capture Colette’s brilliant particularity of style and her unsentimental yet affirmative vision of the world, the translation sensitively renders the unique tone and philosophy of one of the twentieth century’s greatest writers
— Diana Holmes, author of Colette and professor of French, University of Leeds