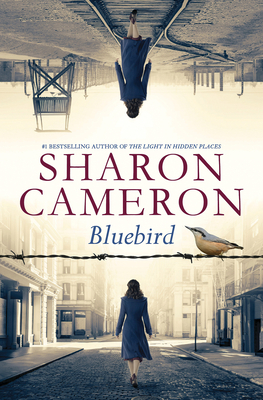 In 1946, Eva leaves behind the rubble of Berlin for the streets of New York City, stepping from the fiery aftermath of one war into another, far colder one, where power is more important than principles, and lies are more plentiful than the truth. Eva holds the key to a deadly secret: Project Bluebird -- a horrific experiment of the concentration camps, capable of tipping the balance of world power. Both the Americans and the Soviets want Bluebird, and it is something that neither should ever be allowed to possess.

Critically acclaimed author of The Light in Hidden Places, Sharon Cameron, weaves a taut and affecting thriller ripe with intrigue and romance in this alternately chilling and poignant portrait of the personal betrayals, terrifying injustices, and deadly secrets that seethe beneath the surface in the aftermath of World War II.

Sharon Cameron's debut novel The Dark Unwinding was awarded the Society of Children's Book Writers and Illustrators' Sue Alexander Award for Most Promising New Work and the SCBWI Crystal Kite Award, and was named a YALSA Best Fiction for Young Adults selection. Sharon is also the author of its sequel, A Spark Unseen; Rook, which was selected as an Indiebound Indie Next List Top Ten selection, a YALSA Best Fiction for Young Adults selection, and a Parents' Choice gold medalist; and The Forgetting, a #1 New York Times bestseller and an Indie Next Pick of the List selection, and its companion novel, The Knowing. She lives with her family in Nashville, Tennessee, and you can visit her online at sharoncameronbooks.com.

Praise for The Light in Hidden Places:

"Beautifully written and meticulously researched. Sharon Cameron captures the extraordinary story of one of history's hidden heroes. Every devastating moment is both gripping and powerful." -- Ruta Sepetys, New York Times bestselling author of Salt to the Sea

"Sharon Cameron's exciting novel weaves together the lightheartedness, sheer terror, and incredible inner strength of this young woman, my mom. This book exceeds all my expectations." -- Ed Burzminski, son of Stefania Podgórska

* "Cameron's wide-ranging research and deft storytelling abilities combine to create an astoundingly authentic first-person narration. Her exquisite prose conveys in riveting detail exactly what it was like for Stefania to live through the horrors she witnessed." -- BookPage, starred review

"A true story of faith, love, and heroism. [Cameron] deftly details Stefania's brave actions and includes moving family photographs in the author's note... Readers will be pulled in by the compelling opening and stay for the emotional journey. An inspirational read." -- Kirkus Reviews

"Empowered by thorough research -- an author's note details events after the war -- Cameron successfully conveys horror and bravery in this powerful and captivating novel. A memorable read." -- Booklist

"Cameron's novel is heartbreakingly real in its attention to detail and its ability to pack emotional punches." -- Bulletin of the Center for Children's Books

"This story of extraordinary survival is bolstered by an author's note, accompanied by photos." -- Publishers Weekly

Praise for The Knowing:

* "Both a politically charged adventure and culture study, this thought-provoking dystopia stands firmly on its own." -- Booklist, starred review

"Diverse, well-drawn characters abound, but in the riveting power struggles that ensue, women are dominant players, ruthless ideologues willing to sacrifice all that interferes with the goal. The intricately woven narrative threads come together in a suspenseful denouement sure to leave readers hoping for another installment." -- Kirkus Reviews

"Wildly inventive yet somehow believable. . . For all of its fantastical elements . . . this companion novel is ultimately a story about two teenagers, Samara and Beckett, finding their places in the world, managing familial and societal expectations, and falling in love. Cameron is a writer of prime caliber." -- School Library Journal

Praise for The Forgetting:

"The Forgetting is Sharon Cameron's fourth young adult novel, and she's grown adept at blurring the lines between fantasy, dystopian and science-fiction genres. Cameron reminds us, through Nadia's documented memories, that we must learn to appreciate the truth as much as question it, exploring the morality tucked within the fallacy of memory." -- Bookpage, Top Pick

"The suspense kicks right off in this action-packed tale, quickly wrapping readers up in the drama." -- Romantic Times

"Cameron crafts a brilliant homage to The Scarlet Pimpernel yet also manages to make her telling unique, particularly in... the many twists, turns, betrayals, and lucky breaks [that] will keep readers breathless until the very end." -- Bulletin of the Center for Children's Books

"Rook is sure to be a read all readers will remember." -- Portland Book Review

Praise for The Dark Unwinding:

"A strikingly original, twisty gothic tale that holds surprises around every dark corner." -- Judy Blundell, author of What I Saw and How I Lied

Praise for A Spark Unseen: