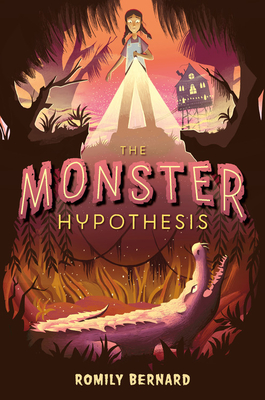 By Romily Bernard
$16.99
Not Available In-Store - Usually Ships from Warehouse in 1-5 Days

Welcome to Bohring-home to 453 people, 2,053 alligators, and one monster curse.
Correction: home to 454 people, now that Kick Winter is living in the swamp Hollows with her Grandma Missouri, the town (fake) psychic. Bohring is anything but boring for Kick who has already blown a hole through the kitchen floor, befriended a chicken-eating gator, and discovered that the town's hundred-year curse is upon them.
It's the Bohring curse and all the kids are about to become monsters-or so the legend goes. People are worried-except for Kick. She knows there's a scientific explanation for everything, especially curses and monsters. But Kick is the new kid in school and she's determined to make a name for herself . . . by pretending to be psychic.
According to her calculations: one teeny-tiny life + (fake) psychic skills = popularity. But when kids start disappearing and glowing creatures start showing up, Kick's theory quickly evaporates in a puff of foul-smelling swamp gas. Can Kick use her (real) science smarts to prove the curse is a hoax? Or is it just-maybe-sort of-somehow possible the curse is here?
Author Romily Bernard weaves a fast-paced middle-grade mystery filled with humor and scientific intrigue, set in a perfectly eerie Southern town.

Romily Bernard is the author of the Munchem Academy books: The Boy Who Knew Too Much and The Girl Who Knew Even More. Bernard graduated from Georgia State University with a literature degree. Her debut young adult book, Find Me, won the Golden Hearts Awards for YA Romance. She lives in Georgia with her husband and daughter. Learn more at www.romilybernard.com.
My Account • Sign In • Sign Out • Register
NEW & USED BOOKS
AUTHOR EVENTS • GIFTS
Tempe
6428 South McClintock Drive
480.730.0205
[Google Map]
10am-7pm daily
Trade Counter 11am-6pm daily