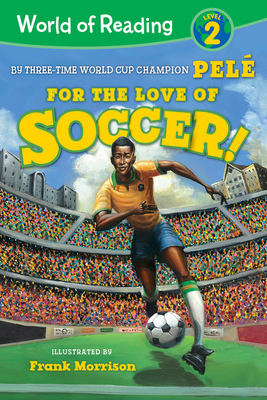 By Pelé, Frank Morrison (Illustrator)
$4.99
On Our Shelves Now

What does the world's greatest soccer player love about the game? The same things that you and I do! Speed, teamwork, dribbling, passing, taking your best shot--and making a G-O-O-A-A-A-L!
Join Pelé, world champion soccer star, as he celebrates the kick and thrill of his favorite sport. Artist Frank Morrison sets up the play with two dynamic visual stories: Pelé's inspiring rise to fame, and a young fan's efforts to follow in his hero's speedy footsteps. Together, words and pictures deliver all the fun and excitement of a closely matched game.

Pelé joined his first professional team at age 15, and went on to a dazzling career. He became the top scorer in the history of the Brazil national team, as well as the first player ever to win three World Cup medals. He also played for the New York Cosmos, and his charisma and grace on the field helped popularize soccer in America. Since his retirement in 1977, he has been an ambassador for soccer worldwide. This is his first book for children.

Frank Morrison is known for his energetic, fluid illustrations of dancers, musicians, and athletes. He is the illustrator of Out of the Ballpark by Alex Rodriguez and Queen of the Scene by Queen Latifah, and was awarded a Coretta Scott King/John Steptoe Award for New Talent for Jazzy Miz Mozetta by Brenda C. Roberts, as well as a Coretta Scott King Illustrator Award for Let the Children March by Monica Clark-Robinson, and a Coretta Scott King Illustrator Honor for Little Melba and Her Big Trombone by Katheryn Russell-Brown. He lives in Atlanta, Georgia with his wife and five children. Visit him online at morrisongraphics.com.

"A must-share for soccer enthusiasts of any age."—Kirkus Reviews