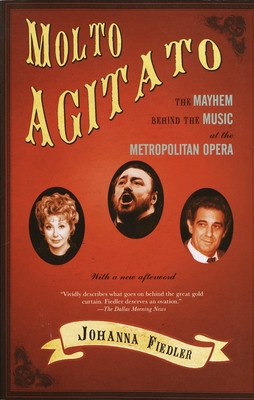 If the opera world is full of “intrigue, double meanings, and devious dramatics,” then no place exemplifies this more than the world-famous Metropolitan Opera, where politics, ambition, and oversized egos have traditionally taken center stage along with some of the world’s richest music. Drawing on her fifteen years as its press representative, Johanna Fiedler explodes the traditional secrecy that surrounds the Met in this wonderfully entertaining account of its tumuluous history.

Fiedler chronicles the Met’s early days as a home for legends like Toscanini, Mahler, and Caruso, and gives a fascinating account of the middle years when haughty blue-bloods battled stubborn adminstrators for control of a company that would emerge as America’s premiere opera house. She takes us behind the grand gold-curtain stage in more recent years as well, showing how musical superstars like Luciano Pavarotti, Plácido Domingo, and Kathleen Battle have electrified performances and scandalized the public. But most revelatory are Fiedler’s portrayals of James Levine and Joseph Volpe and their practically parallel ascendancies—Levine rising from prodigy to artistic director, Volpe advancing from stagehand to general manager—and their once strained relationship. Weaving together the personal, economic, and artistic struggles that characterize the Met’s long and vibrant history, Molto Agitato is a must-read saga of power, wealth, and, above all, great music.

“Weav[es] telling vignettes and interseting interpretations into a rich tapestry that vividly describes what goes on behind the great gold curtain. [Fiedler] deserves an ovation.” --The Dallas Morning News

“Elegant. . . . It’s the opera book that tells you what you really want to know, not by gossiping, but by sensitive discussion of facts long-hidden behing [the Met’s] Kremlin-like façade.” —The Philadelphia Inquirer

“High-toned dish. . . . [The Met is] creepy one minute, transcendentally beautiful the next, but never, ever boring.” --St. Louis Post-Dispatch

“Compelling. . . .Lively, in-depth. . . . Fiedler doesn’t stint in her tales about those temperamental artists who make the business of running an opera company unlike any other.” --The Wall Street Journal

“Provides a unique perspective not only on the opera scene, but on the changing landscape of American society since the Met’s opening in 1883. . . . It also serves up some pretty spicy dish.” —The Boston Globe

“The juicy survival saga of a leaky vessel that has managed to stay afloat despite constant threats of disaster and a passenger list out of Ship of Fools.” —The New York Observer

“Opera buffs looking for a chatty, informative and basically fair take on the Met will enjoy the book.” —The New York Times Book Review

“There’s plenty of gossip. . . . Digs into power struggles, plus diva dramas, even a murder.” --USA Today

“Fiedler succeeds in exposing all the dirty linen that she used to work so hard to conceal: the affairs, the squables, the nasty memos.” --The New Yorker

“High-toned dish. . . . [The Met is] creepy one minute, transcendentally beautiful the next, but never, ever boring.” --St. Louis Post-Dispatch

“A rare, gossipy, behind-the-scenes look into the life of New York’s Metropolitan Opera, where passions are as dramatic offstage as on.” --Town and Country

“A facsinating survey of the misdeeds going on in the back. . . . A must-read for all operaphiles.” --The State (Columbia, SC)

“A thorough-going, eyeball-rolling institutional history. . . . One couldn’t ask for a more knowledgeable guide to the inner wrokings of the Met.” --Kirkus Reviews

“Fiedler delivers the goods. . . . By the time I finished Molto Agitato, I was ready for more.” --John Griffin, San Antonio Express-News