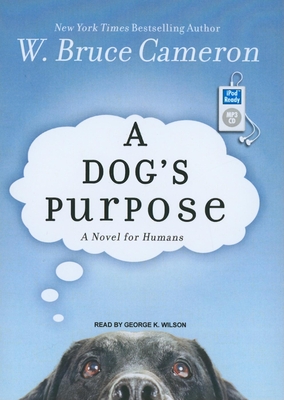 By W. Bruce Cameron, George K. Wilson (Narrated by)
Email or call for price
Out of Print

“This is a charming story of a dog's search for meaning over the course of several lifetimes, from that of a feral dog, to a beloved family pet, a search-and-rescue dog, and a victim of abuse. I laughed and cried, all the while appreciating the fragility of life as seen through the first-person narration of this remarkable dog.”
— Fran Wilson, Colorado State University Bookstore, Fort Collins, CO

After a tragically short life as a stray mutt, Bailey is surprised to find himself reborn as a rambunctious golden-haired puppy. Bailey's search for his new life's meaning leads him into the loving arms of eight-year-old Ethan. During their countless adventures, Bailey joyously discovers how to be a good dog. But this life as a beloved family pet is not the end of Bailey's journey. Reborn as a puppy yet again, Bailey wonders, will he ever find his purpose? Heartwarming, insightful, and often laugh-out-loud funny, A Dog's Purpose is not only the story of a dog's many lives but also a dog's-eye commentary on human relationships and the unbreakable bonds between man and man's best friend. This beautifully crafted novel teaches us that love never dies, that our true friends are always with us, and that every creature on Earth is born with a purpose.

W. Bruce Cameron is the "New York Times" bestselling author of "8 Simple Rules for Dating My Teenage Daughter," which became a hit television series, and his nationally syndicated column is read by over three million readers every week.