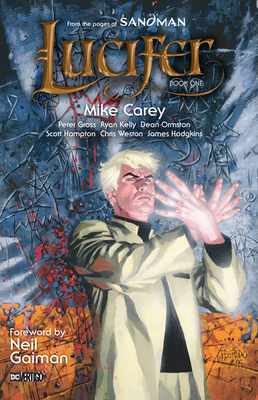 Lucifer is one of the rare spinoffs that, in my opinion, doesn't just match the quality of its parent series, but in many aspects goes as far as to surpass it. Carey managed to write what I consider one of the great approaches to Lucifer-as-character.
"They used to call the devil the father of lies. But for someone whose sin is meant to be pride, you'd think that lying would leave something of a sour taste. So my theory is that when the devil wants to get something out of you, he doesn't lie at all. He tells you the exact, literal truth. And he lets you find your own way to hell." — From Amy's Picks (Page 5)

Cast out of Heaven, thrown down to rule in Hell, Lucifer Morningstar has resigned his post and abandoned his kingdom for the mortal city of Los Angles.  Emerging from the pages of writer Neil Gaiman's award-winning series The Sandman, the former Lord of Hell is now enjoying a quiet retirement as the propretor of Lux, L.A.'s most elite piano bar.

But now an assignment from the Creator Himself is going to change all that.

If Lucifer agrees to do Heaven's dirty work, he can name his own price--but both the task and reward are more than they seem.   Thrown into a position of great threat and ultimate opportunity, Lucifer knows that threading a path through this maze will require the harshest of sacrifices.

Writer Mike Carey, best known for his work on Vertigo's Lucifer and Hellblazer, has made his mark in comics.  Born in Liverpool, England, Carey worked as a teacher for fifteen years before gaining regular work writing for several independent companies. In 1999 he wrote the Sandman spinoff miniseries The Sandman Presents: Lucifer.  This led to the Lucifer solo title which earned him a nomination for the 2001 Will Eisner Comic Industry Awards - Best Writer. His additional Vertigo projects have included Faker, Crossing Midnight and The Unwritten. Beyond DC, Carey was also recognized for his work on Marvel's X-Men titles.  He makes his home in London with his wife, Lin, and his children, Davey, Ben and Louise.

"A work of genius in the dark fantasy genre..."—Comics International