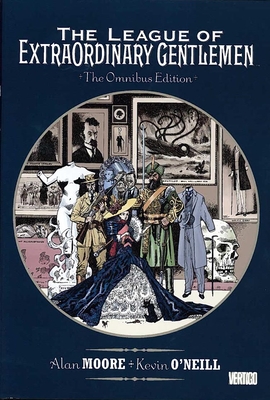 This is a book-worm's dream come true, the ultimate piece of fan-fiction penned by a master. Alan Moore clearly has an intense love for these characters because he realizes them in ways which live, breathe, and ring absolutely true to the intents of the original stories. The story itself takes place in a world in which every fictional story ever told exists, side-by-side with humanity--Cthulhu, Dracula, Prospero, James Bond, everybody. The setting is a Victorian London which is very fittingly almost someone's Dadaist idea of Victorian London rather than the historical reality, with industrial-revolution exploding in an endless scheme of construction across the city in spiraling, crudely mechanized structures ruled over by a shadowy, Masonic government with eerie occult undertones--brought brilliantly to life by O'Neill's artwork. Against this backdrop, the British Crown assembles a top-secret military group of exceptional individuals--ranging from Mina Harker to Captain Nemo. The series is in essence, a love letter to the craft of storytelling. And if all this doesn't sell you, the first book actually climaxes in a turf war in London's Limehouse district between Professor James Moriarty and Dr. Fu Manchu fought with Cavorite powered airships. — From Salvatore's Picks

At last, the original two League Of Extraordinary Gentlemen epics are collected in a single volume!

Then, one month later, the skies over England are filled with flaming rockets as Mars launches the first salvo of an invasion. Only our stalwart adventurers can save mother England and the Earth itself.

Alan Moore is perhaps the most acclaimed writer in the graphic story medium, having garnered countless awards for works such as Watchmen, V for Vendetta, Swamp Thing and Miracleman. He is also the mastermind behind the America's Best Comics line, through which he has created (along with many talented illustrators) The League of Extraordinary Gentlemen, Promethea, Tom Strong, Tomorrow Stories and Top Ten. As one of the medium's most important innovators since the early 1980s, Moore has influenced an entire generation of comics creators, and his work continues to inspire an ever-growing audience.

"Acclaimed comics author Moore (Watchmen) has combined his love of 19th-century adventure literature with an imaginative mastery of its 20th-century corollary, the superhero comic book."—Publishers Weekly