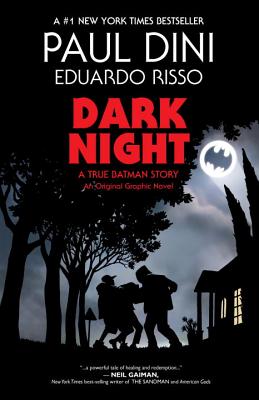 Success alone couldn’t protect Paul Dini from insecurity and unhappiness. Late one night, while walking home from an unsuccessful date, Paul was ambushed, mugged, and violently beaten near his home in LA. The muggers smashed the side of Paul’s skull so forcefully that certain fragments were ground into non-existence. Blunt force left his upper body and thigh severely battered, and one of his eyesockets had to be reconstructed with pins and a metal plate. As taxing as the physical recovery was, the psychological recovery proved moreso, as his vivid imagination appears alongside his everyday life. The figure of Batman always looms close by, urging him to pick himself up and go back to work writing for Batman the Animated Series. His demons--anxiety, self-loathing, depression--are voiced powerfully by figures like the Joker, Scarecrow, and Two-Face. This wonderfully imaginative story speaks to comic book lovers anyone who has suffered trauma, physical or mental. It’s a story about stories, namely the most elemental story of all: the story about heroes and villains, about light and darkness, about human struggle and ultimate triumph. — From Salvatore's Picks

The #1 New York Times bestselling original graphic novel by the critically acclaimed author Paul Dini! DARK NIGHT: A TRUE BATMAN STORY is the harrowing and eloquent autobiographical tale of Dini’s courageous struggle to overcome a truly desperate situation. It is a Batman story like no other and one that will truly resonate with fans, with art by the incredible and talented Eduardo Risso (100 BULLETS).

In the 1990s, writer Paul Dini had a flourishing career penning the hugely popular Batman: The Animated Series and Tiny Toon Adventures. It was a golden era of television screenwriting, and Dini and his fellow writers were at the forefront of the glittering Hollywood scene. In one night, everything would change.

Walking home one evening, Dini was jumped and viciously beaten. With several broken bones and a shattered face, Dini experienced an arduous recovery process, hampered by the imagined antics of the villains he was writing for television, including the Joker, Harley Quinn, and the Penguin. But despite how bleak his circumstances were, or perhaps because of it, Dini also always imagined the Batman at his side, constantly chivvying him along during his darkest moments.

While most know the Caped Crusader as the all-abiding icon of justice and authority, in this surprising story, we see Batman in a new light—not as the dark avenger, but the savior who helped a discouraged man recover mentally from a brutal attack that left him unable to face the world.

Paul Dini is a multiple Emmy and Eisner Award-winning writer and producer who has helped redefine the legends of the DC Universe in such series as The New Batman/Superman Adventures, Batman Beyond, Krypto and Justice League Unlimited. In doing so, he co-created one of the most popular characters in comics in Harley Quinn, who originated as a character in Batman: The Animated Series. In comics he has authored The World's Greatest Super-Heroes, illustrated by Alex Ross. Dini has also collaborated with Chip Kidd on Batman Animated for HarperCollins.

“Paul Dini has turned a tragic night of fear into an instantly-classic graphic novel." —Washington Post

“This graphic novel stands as one of the bravest, most vulnerable works of the medium in years...” —Paste Magazine

“[Dark Night: A True Batman Story] an extremely personal work that still hedges even as it reveals, partly out of self-preservation.” —Publishers Weekly

“A masterpiece of biographical storytelling in the comics medium.” —Huffington Post

“Paul Dini, recounts the depression, alcoholism, and self-harm he endured during the height of the cartoon’s popularity, and Eduardo Risso provides brutally evocative artwork to accompany it.” —Vulture

“The vulnerability shown by Dini in laying bare his internal wounds, and the ability of Risso to so compassionately, beautifully, insightfully give image to Dini’s emotions and words—makes this a standout in the medium, among the finest works of comic art published in the 21st century.” —Forbes


“A very emotional and powerful read. Dini bares his soul on the page.” —IGN

"A powerful tale of healing and redemption." —Neil Gaiman, New York Times best-selling author of The Sandman and American Gods

"Riveting form start to finish: so revealing, so poignant, so insightful...a masterpiece." —Mark Hamill, Actor in Star Wars, Voice actor in Batman: The Animated Series and Batman: The Killing Joke