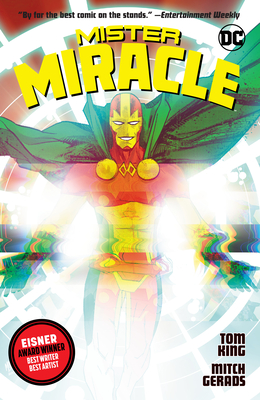 By Tom King, Mitch Gerads (Illustrator)
$24.99
On Our Shelves Now

No prison can hold him. No trap can contain him. He is Scott Free, the worldwide celebrity sensation known as Mister Miracle, and he is the greatest escape artist who ever lived. But can he pull off the ultimate trick--and escape death itself?

No prison can hold him. No trap can contain him. He is Scott Free, the worldwide celebrity sensation known as Mister Miracle, and he is the greatest escape artist who ever lived.

But can he pull off the ultimate trick--and escape death itself?

Something has gone horribly wrong with the perfect life that Scott and his wife, Big Barda, have made for themselves on Earth. With war raging between their homeworlds of Apokolips and New Genesis, Scott's cruel adoptive father, Darkseid, seems to have finally found the Anti-Life Equation--the weapon that will give him total victory.

As the mountains of bodies on both sides grow ever higher, only Mister Miracle can stop the slaughter and restore peace. But the terrible power of the Anti-Life Equation may already be at work in his own mind, warping his reality and shattering the fragile happiness he's found with the woman he loves.

Is death the trap that's been waiting for him all along? Or is it life itself? And what price will Scott Free have to pay to learn the answer?

Tom King is a comic book writer and novelist, best known for his work at DC Comics including Batman, Mister Miracle and The Omega Men. He won Eisner awards for best writer for his work on Mister Miracle and Marvel's Vision. He often relies on his experience as an ex-CIA agent and experiences during the recent conflicts in the Middle East in his writing. King joined the CIA counterterrorism unit after September 11 where he stayed for seven years before to writing his first novel A Once Crowded Sky.

“The Best Superhero Story of the Summer. Mister Miracle might be one of the rawest superhero comics I've read in recent memory.” —GQ

“One of the most mind-bending superhero comics currently on stands.” —Entertainment Weekly

“For those wishing that an 'adult superhero comic' meant more than just swearing and violence, Mister Miracle might just be the series you’ve been waiting for all along.” —Hollywood Reporter

“An excellent read on its own and serves as a compelling entry point for new readers unsure where to start with the DC spectrum of superheroes.” —Shelf Awareness

“King and Gerads have created one of the most critically acclaimed graphic novels of the last year. A meditation on war and a domestic drama with dialogue that would satisfy any Netflix drama binge-watcher.” —The Independent

"Heartbreaking, funny, and human, it's an all-time classic in the making." —Wired

"This is a most fitting tribute to Kirby by way of King: a tale of epic cataclysm both delicately devastating and quietly joyful." —Booklist (Starred Review)

"Alternately heartbreaking, thrilling, and very funny, this is a tale of superheroics that for all its interstellar action argues that the struggle to become a happy, functioning adult is the most colossal challenge of all." —Library Journal

"A solid stand-alone that should have broad teen and adult appeal for those seeking more unusual cape-and-tights fare." —Kirkus Reviews

"Every year, one book stands up above everyone else's. Fans and creators alike stop and stare in amazement at a couple of creators finding a new voice, new point of view, and new levels of artistic expression. This year it is Mister Miracle." —Brian Michael Bendis, author of Superman

“This is a tender, subtle story that should resonate with anyone who’s ever been through a tough time. It’s also the best superhero graphic novel I have read in years.”­—Toronto Star

"There are master magicians performing here. Their names are Tom King and Mitch Gerads." —Brad Meltzer, author of Identity Crisis

“Mister Miracle spirals out of control in his dazzling new comic.” —A.V. Club

“A shocking and profound story that is, without question, one of the best comics in years.”—IGN

“A never-ending loop of the bizarre, anxious and absurd…King and Gerads excel at creating incredibly likable characters who attempt to untangle doomed causes—a legacy perfect for this new book.” —Paste Magazine