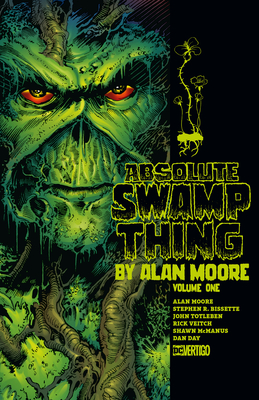 Before the groundbreaking graphic novel Watchmen, Alan Moore made his debut in the U.S. comic book market with the revitalization of the horror comic book Swamp Thing. Moore's classic, critically acclaimed Swamp Thing stories are now collected in a slipcased hardcover edition with brand-new coloring in Absolute Swamp Thing by Alan Moore Vol. 1.

In 1983, a revolutionary English writer joined a trio of trailblazing American artists to revitalize a longstanding comic book icon. By the time they'd finished their work four years later, SWAMP THING by Alan Moore, Stephen R, Bissette, John Totleben, and Rick Veitch was universally recognized as one of the handful of titles that defined a new era of complexity and depth in modern graphic storytelling, and their run on the series remains one of the medium's most enduring masterpieces.

Alan Moore is perhaps the most acclaimed writer in the graphic story medium, having garnered countless awards for works such as Watchmen, V for Vendetta, From Hell, Miracleman and Swamp Thing. He is also the mastermind behind the America's Best Comics line, through which he has created (along with many talented illustrators) The League Of Extraordinary Gentlemen, Promethea, Tom Strong, Tomorrow Stories and Top 10. As one of the medium's most important innovators since the early 1980s, Moore has influenced an entire generation of comics creators, and his work continues to inspire an ever-growing audience. Moore resides in central England.

"With these stories THE SAGA OF THE SWAMP THING made comics history. Once you've read them, I think you'll understand why."--Neil Gaiman

"Moore, Bissette, and Totleben are to modern horror comics what Stephen King is to modern horror novels. The work they do shares a common ingredient that makes us feel these stories deeply and personally: that ingredient is humanity."--The Comics Journal

"Perhaps the brainiest and scariest horror narrative of the '80s."--Rolling Stone

"Another of the true classics of the genre."--IGN

"SWAMP THING was a joy on first reading, and it's remained a joy."--Clive Barker

"Alan Moore's Swamp Thing is one of the best creative runs in the history of comics, surpassing all expectations and earning its place above and beyond these other classics." --IGN
My Account • Sign In • Sign Out • Register
NEW & USED BOOKS
AUTHOR EVENTS • GIFTS
Tempe
6428 South McClintock Drive
480.730.0205
[Google Map]
10am-7pm daily
Trade Counter 11am-6pm daily