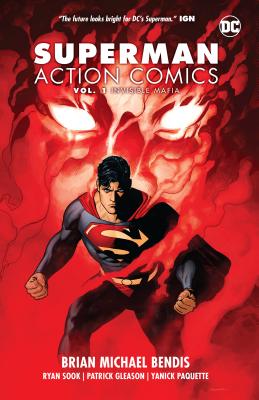 In costume, Superman is the world's greatest hero. In plain clothes, he's Clark Kent, one of the Daily Planet's best investigative reporters. But on the streets of Metropolis, there's a new threat rising that neither of them can see...until it's too late.

A new power called the Red Cloud has taken over the city's underworld, and it's like nothing Superman has ever faced before. As he chases down the story, his mind is preoccupied by the absence of his wife Lois Lane and their son Jonathan--leaving the Man of Tomorrow vulnerable to the mysterious new villain of today!

Even with all his power, can the Man of Steel stop what's coming for his family and his city?

Brian Michael Bendis is an award-winning comics creator, New York Times bestseller and one of the most successful writers working in mainstream comics. In his 20 years at Marvel Comics, he produced some of the greatest graphic novels the publisher has ever seen, including Daredevil, Ultimate Spider-Man, New Avengers, House of M, Secret Invasion, Avengers: Age of Ultron, Alias, All-New X-Men, Uncanny X-Men, Iron Man, Guardians of the Galaxy and many more. Bendis is also known for his creator-owned works, including Powers, Scarlet, Brilliant, Goldfish, Fire, Jinx and Torso. He lives in Portland, OR with his family.

“Action Comics easily ranks as his strongest Superman comic yet and proves once again that the franchise is in capable hands.” —IGN

“His take on Clark Kent and his invulnerable alter-ego, didn’t feel like Bendis. It felt like Superman.” —Polygon