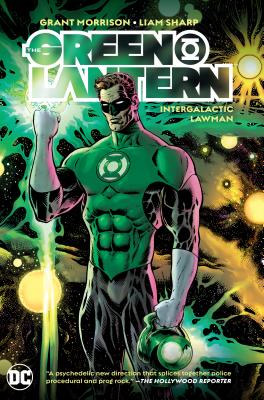 Legendary writer Grant Morrison is taking Green Lantern back to his roots, exploring the popular hero's role as the universe's best space cop. It's Law and Order in space as Hal Jordan encounters a mysterious alien hiding in plain sight, setting off a chain of events that will bring the Green Lantern Corps to its knees!

When Green Lantern Hal Jordan encounters an alien hiding in plain sight, it sets off a chain of events that rocks the Green Lantern Corps to its foundations. There's an intergalactic conspiracy afoot, and a traitor within the Corps might be pulling the strings... Then, the Earth itself has vanished and been put up for auction to a buyer whose claim may be impossible to break without Hal violating the Lanterns' most cherished rule!

With vivid new takes on the Controllers, the Darkstars, the Guardians of the Universe and many more Green Lantern enemies and allies drawn from decades of DC Comics, Morrison and Sharp spin an epic tale that ranges from Earth to the farthest reaches of space, starting in The Green Lantern: Intergalactic Lawman, collecting issues #1-6 of the new hit series!

Writer Grant Morrison is known for his innovative work on comics from the graphic novel Batman: Arkham Asylum to acclaimed runs on Animal Man and Doom Patrol, as well as his subversive creator-owned titles such as The Invisibles, Seaguy and WE3. Grant has written best-selling runs on JLA, Seven Soldiers of Victory and New X-Men and helped to reinvent the DC Universe in The Multiversity, All Star Superman, 52, Batman, Batman & Robin and Batman Incorporated.More Recently Grant has had his creator owned series Happy! turned into a TV series on the SYFY network. He also made his return to monthly comics in 2018 with The Green Lantern.

"A psychedelic new direction that splices together police procedural and prog rock." — The Hollywood Reporter

"It wouldn't be a Morrison comic without plenty of psychedelic weirdness and ambitious storytelling." —IGN

"Grant Morrison at his best and weirdest." —CBR

"Every panel looks alive — it's blinking, it's breathing and moving." —Syfy Wire