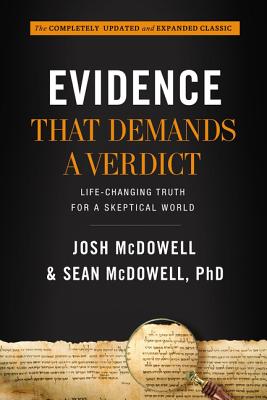 Equip yourself to present and defend the claims of the Christian faith.

The truth of the Bible doesn't change, but its critics do. Now with his son Sean McDowell, Josh McDowell has updated and expanded the modern apologetics classic for a new generation. Evidence That Demands a Verdict provides expansive defense of Christianity's core truths and thoughtful responses to the Bible's most difficult and extraordinary passages. It invites readers to bring their doubts and doesn't shy away from the tough questions.

Topics and questions are covered in four parts:

Serving as a go-to reference for even the toughest questions, Evidence that Demands a Verdict continues to encourage and strengthen millions by providing Christians the answers they need to defend their faith against the harshest critics and skeptics.

Evidence That Demands a Verdict was the winner of the 2018 ECPA Christian Book award for Bible Reference Works.