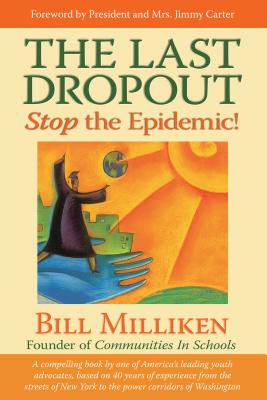 • Almost one-third of all high-school students fail to graduate with their class; among minorities, the dropout rate is almost 50 percent.
• Dropouts are more likely than their peers to be unemployed, live in poverty, have poor health, depend upon social services, and go to jail.
• The combined loss of income and revenue to the American economy from a single year’s dropouts is about $192 billion.

But there is a solution to the dropout crisis that is proven, effective, replicable, and sustainable! Communities In Schools (CIS) reaches more than one million at-risk students and their families annually in more than 3,000 American schools. These kids would fall far below the national average for every measure of student success. Yet 98 percent of CIS-tracked students stayed in school. Why? What makes the difference?

The Last Dropout offers nine key principles that Communities In Schools has tested over three decades. Interwoven are the dramatic life stories of CIS founder Bill Milliken and his colleagues, a journey that began in the turbulent 1960s as youth workers with a spiritual mission struggled to turn around the lives of dropouts and addicts. It traces the evolution of the CIS movement from a handful of groundbreaking "street academies" to a national network of hundreds of local affiliates.

The Last Dropout also features stories about how CIS leaders have adopted these principles in their own communities, with stunning results!

*From The Silent Epidemic (Bridgeland, Dilulio, and Morrison, 2006)

Bill Milliken has been a tireless advocate for disenfranchised youth and one of the foremost pioneers in the movement to connect schools with community resources to help troubled students graduate and succeed in life. In 1977, he and others developed a model organization, now known as Communities In Schools, for which he served more than 20 years as national president and currently is vice chairman of the board. Bill has advised four U.S. Presidents of both parties and has received numerous awards, including the Edward A. Smith Award for Excellence in Nonprofit Leadership, the Champion for Children Award from the American Association of School Administrators, the National Caring Award from the Caring Institute, the Temple Award for Creative Altruism from the Institute of Noetic Sciences, and an honorary doctorate from Bard College.

At the Ford Foundation, we believe in the inherent dignity of all people. Yet around the world, billions of people are excluded from full participation in the political, economic, and cultural systems that shape their lives. We view this fundamental inequality as the defining challenge of our time, one that limits the potential of all people, everywhere. Addressing inequality is at the center of everything we do. Communities In Schools has been a standard-bearer for social justice, beginning with its roots in Harlem during the 1960s. The CIS model is proven and effective and their mission going forward is not just to help low-income children and families and people of color to navigate the barriers but to take down the barriers to equality all together. Bill Milliken’s book reveals so much about the roots—and the heart—of the CIS movement. - Darren Walker, president, Ford Foundation

I’ve supported Bill Milliken and Communities In Schools for many years. More than ever, their work is vitally necessary as we strive to become one nation. The catastrophic division between the rich and those left behind disproportionately affects children. The Last Dropout explains what schools and communities can do in plain and compelling language. - Arianna Huffington, founder and CEO, Thrive Global

I’m consistently amazed by the excellent work Communities In Schools does every year. They continue to set the standard for helping kids, and it all starts with Bill Milliken’s and Rey Saldaña’s leadership. As a CIS National Board member, I am proud to be a part of their efforts to remove barriers and empower students. - Shaquille O’Neal

Bill’s uplifting story of his life’s work shows us that every child has something to contribute, and that to achieve that potential, we must create the right environment for our children. Through better access to community services, rich connections with others, and a sense of ownership for their own success, our children can thrive in both academics and in life. In his comprehensive book, Bill engages us to envision the CIS model scaled to reach every schoolchild across the country, and he challenges all of us to work together to help our children achieve the success they deserve. - Pam and Pierre Omidyar, co-founders, The Omidyar Group

Bill Milliken has distilled 40 years of experience—with kids on the streets, with teachers and staff in schools, with laypeople and clergy in churches and temples, with corporate leaders in boardrooms, and with public leaders in halls of government—to legions of key teachers and principals—with a single, compelling purpose: helping troubled students do well in school and reclaim their futures. The support for Bill’s founding work in cities and schools just continues to grow. The title of Part I summarizes not only the book but also the theme of Bill Milliken’s own life and work: ‘It all starts with relationships.’ This is both a powerfully practical and spiritually moving book. Now there’s a combination! - Jim Wallis, author of God’s Politics: Why the Right Gets It Wrong and the Left Doesn’t Get It and America’s Original Sin: Racism, White Privilege, and the Bridge to a New America

Bill Milliken’s book is essential reading for any donor who cares about the future of education in America and the importance of an educated workforce. He vividly illustrates the power of collaboration and innovation to combat the dropout epidemic that plagues our local school systems. The Last Dropout describes a leveraged alternative to throwing money at seemingly intractable problems; it describes a robust strategy that delivers breakthrough results—and offers a significant multiplier on charitable dollars. America’s children deserve to benefit from these insights. - Thomas J. Tierney, co-chairman and co-founder, the Bridgespan Group

Having spent years helping to improve children’s health in our schools, I believe we need basic guidelines for healthy living and flourishing at every level of the community. For that same reason, I enthusiastically support Communities In Schools. They too are providing guidelines and leadership for educating children and giving them a solid foundation for their future well-being. This book explains how and why. - Paul Scialla, founder/CEO, Delos; founder, International WELL Building Institute; board member, Chopra Foundation; founding board member, JUST Capital

It’s clear that we need bold action to transform struggling schools and help change the futures of children and neighborhoods. I believe every child has the right to a quality education. Communities In Schools has championed this right, and their unique model of service delivery, for more than 45 years. I’ve known Bill and serve on the National Board of Communities In Schools because they are committed to taking down barriers to a quality education for all children. With Rey Saldaña as our new president, who is also a CIS alum, I’m confident CIS will play a vital role in education policy as a social justice issue for years to come. - Arne Duncan, managing partner, Emerson Collective, Former U.S. Secretary of Education

I have led the American Association of School Administrators in the quest to support the total child—physical and mental health, early childhood education, basic resources lacking due to the devastating effects of childhood poverty. Bill Milliken and the Communities In Schools network have been our invaluable partners in this work. This new edition of The Last Dropout shows why we have to focus our resources where they’re needed most: on schools serving children of poverty, so as to close the unjust and damaging achievement gap in American education. - Dan Domenech, executive director, American Association of School Administrators; board member, Communities In Schools National; board chair, Communities In Schools of Virginia

Bill Milliken is my good friend, and his example has been deeply valuable to me over the years. I’m gratified, but not surprised, he’s one of the pioneers for empowering young people throughout our country. Bill, congratulations on The Last Dropout. Thank you for all your continuous work and dedication to building America’s future. - Stedman Graham, business advisor, chairman, and CEO of S. Graham & Associates

Starting out as a young analyst in the investment business, I was drawn to try to understand entrepreneurs who sought to do things differently and whose focus was as much on the mission behind their business as it was on the product itself. Many of these entrepreneurs were on the forefront of their industries. Some of them are now household names with products that have transformed the world. What I have learned from these pioneers in the field of business is that these companies had the heart of a nonprofit and the brains of a for-profit.

Bill Milliken, founder of Communities In Schools, is one of the most successful social entrepreneurs I have ever met. With his vision and heart for people, he has transformed the way schools look at the community—and essentially pioneered the concept of bringing integrated health and human services into schools to connect with the most vulnerable children. Communities In Schools, a totally autonomous network of local community-based organizations, has a return on investment of $11.60 for every dollar invested in the program nationwide, and is now recognized through federal legislation as a successful and cost-effective way to keep under-resourced young people in school and graduate them on time.

Communities In Schools has the heart of a nonprofit and the scale of impact of a for-profit. - Michael Moe, founder and CEO, GSV Holdings (GSV)