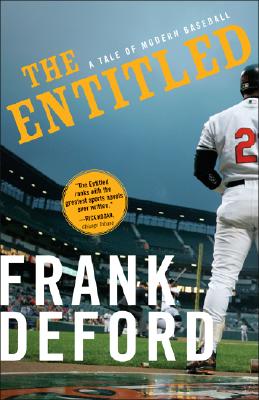 "The Entitled is a baseball masterpiece, like The Natural and Field of Dreams." —Mike Schmidt, Baseball Hall of Fame

From legendary six-time National Sportswriter of the Year and NPR commentator Frank Deford comes a richly detailed, page-turning tale that takes you deep into America's game.

Howie Traveler never made it as a player-his one major league hit and .091 batting average attest to that. He was cursed with that worst of professional maladies, the ill fortune of almost.

Now after years of struggling up the coaching ladder, Howie's finally been given his shot as manager of the Cleveland Indians. But whether Howie can spot a small flaw in a batter's swing won't matter if he can't manage his superstar outfielder Jay Alcazar, a slugger with enormous talent (and an ego to match).

No crisis on the field fazes Jay and no woman off the field rejects him. But one night at a hotel Howie sees something at Jay's door he wishes he hadn't...and it leaves Howie with an impossible choice.

Praise for THE ENTITLED:

"I loved The Entitled…reminded me of the many people I've known and played with-pure baseball." —Lou Piniella, Manager, Chicago Cubs

"In men like Traveler and Alcazar we find the beating heart and struggling soul of baseball..." —Jeff MacGregor, Sports Illustrated; author of Sunday Money

"Engrossing...Readers are exposed to a richly textured understanding of baseball and, no less, of estrangement, ambition, mendacity and the search for one's destiny-notwithstanding the cost in human or financial terms." —Library Journal

"…proves once again that Deford can play at the highest level in any league." —Michael Mewshaw, author of Year of the Gun

"Deford scores another hit with this novel of athletes behaving badly...tackles timely and provocative issues without flinching." —Publishers Weekly

Frank Deford is a six-time National Sportswriter of the Year, Senior Contributing Editor at Sports Illustrated, commentator on NPR’s Morning Edition and a correspondent on the HBO show RealSports with Bryant Gumbel. In addition to being the author of more than a

dozen books, he has been elected to the Hall of Fame of the National Association of Sportscasters and Sportswriters and has been awarded both an Emmy and a Peabody. Two of his books, Everybody’s All-American and Alex: The Life of a Child, a memoir about his daughter who died of cystic fibrosis, have been made into movies. Sporting News describes Deford as “the most influential sports voice among members of the print media” and GQ simply calls him “the world’s greatest sportswriter.” Deford resides in Connecticut with his wife, Carol.