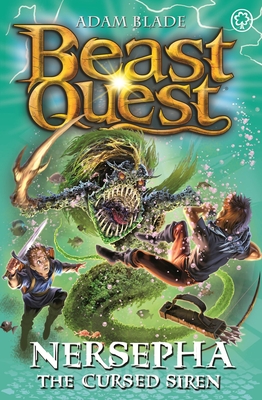 Battle fearsome beasts and fight evil with Tom and Elenna in the bestselling adventure series for boys and girls aged 7 and up.

The young pirate Ria has enchanted a series of ancient Beasts. Tom and Elenna must stop her before she seizes power over Makai for ever - but how can they fight Nersepha, a monstrous mermaid?

There are FOUR thrilling adventures to collect in this series - don't miss out! Menox the Sabre-toothed Terror; Larnak the Swarming Menace; Jurog, Hammer of the Jungle and Nersepha the Cursed Siren

If you like Beast Quest, check out Adam Blade's other series: Team Hero, Sea Quest and Beast Quest: New Blood!

Adam Blade is the name for a small collective of authors who have been writing the bestselling series Beast Quest and Sea Quest for ten years! Beast Quest has now sold over 10 million copies. The newest series from the Adam Blade team is called Team Hero.

You can find out more about all these amazing adventures at the series websites: beastquest.co.uk and teamherobooks.co.uk