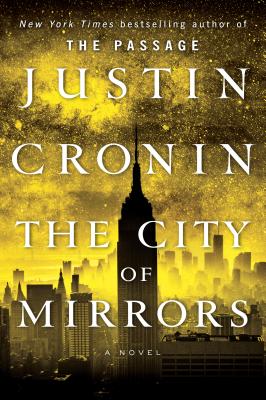 This is book number 3 in the Passage Trilogy series.

In "The Passage "and" The Twelve, "Justin Cronin brilliantly imagined the fall of civilization and humanity's desperate fight to survive. Now all is quiet on the horizon but does silence promise the nightmare's end or the second coming of unspeakable darkness? At last, this bestselling epic races to its breathtaking finale.
"The world we knew is gone. What world will rise in its place?"
The Twelve have been destroyed and the hundred-year reign of darkness that descended upon the world has ended. The survivors are stepping outside their walls, determined to build society anew and daring to dream of a hopeful future.
But far from them, in a dead metropolis, he waits: Zero. The First. Father of the Twelve. The anguish that shattered his human life haunts him, and the hatred spawned by his transformation burns bright. His fury will be quenched only when he destroys Amy humanity's only hope, the Girl from Nowhere who grew up to rise against him.
One last time light and dark will clash, and at last Amy and her friends will know their fate.
Praise for Justin Cronin
One of those rare authors who work on two different levels, blending elegantly crafted literary fiction with cliff-hanging thrills. " Fort Worth Star-Telegram"
""
"The Passage"
Magnificent . . . Cronin has taken his literary gifts, and he has weaponized them. . . . "The Passage" can stand proudly next to Stephen King's apocalyptic masterpiece "The Stand, " but a closer match would be Cormac McCarthy's "The Road." "Time"
Read this book and the ordinary world disappears. Stephen King
A] big, engrossing read that will have you leaving the lights on late into the night. "The Dallas Morning News"
""
"The Twelve"
A] literary superthriller, driven at once by character and plot. " The New York Times Book Review"
""
Gripping . . . Cronin introduces] eerie new elements to his masterful mythology. " The San Diego Union-Tribune"
""
An undeniable and compelling epic . . . a complex narrative of flight and forgiveness, of great suffering and staggering loss, of terrible betrayals and incredible hope. Milwaukee" Journal Sentinel.

Justin Cronin is the "New York Times" bestselling author of "The Passage, " "The Twelve, Mary and O Neil" (which won the PEN/Hemingway Award and the Stephen Crane Prize), and "The Summer Guest." Other honors for his writing include a fellowship from the National Endowment for the Arts and a Whiting Writers Award. A Distinguished Faculty Fellow at Rice University, he divides his time between Houston, Texas, and Cape Cod, Massachusetts."
My Account • Sign In • Sign Out • Register
NEW & USED BOOKS
AUTHOR EVENTS • GIFTS
Tempe
6428 South McClintock Drive
480.730.0205
[Google Map]
Sunday-Friday 10am-8pm
Saturday 9am-8pm
Trade Counter 11am-6pm daily