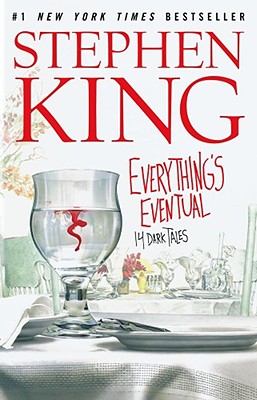 A collection of fourteen dark tales, Everything’s Eventual includes one O. Henry Prize winner, two other award winners, four stories published by The New Yorker, and “Riding the Bullet,” King’s original ebook, which attracted over half a million online readers and became the most famous short story of the decade.

Two of the stories, “The Little Sisters of Eluria” and “Everything’s Eventual” are closely related to the Dark Tower series. “Riding the Bullet,” is the story of Alan Parker, who’s hitchhiking to see his dying mother but takes the wrong ride, farther than he ever intended. In “Lunch at the Gotham Café,” a sparring couple’s contentious lunch turns very, very bloody when the maître d’ gets out of sorts. “1408,” the audio story in print for the first time, is about a successful writer whose specialty is “Ten Nights in Ten Haunted Graveyards” or “Ten Nights in Ten Haunted Houses,” and though Room 1408 at the Dolphin Hotel doesn’t kill him, he won’t be writing about ghosts anymore.

Stories include:
-Autopsy Room Four
-The Man in the Black Suit
-All That You Love Will Be Carried Away
-The Death of Jack Hamilton
-In the Deathroom
-The Little Sisters of Eluria
-Everything's Eventual
-L. T.'s Theory of Pets
-The Road Virus Heads North
-Lunch at the Gotham Café
-That Feeling, You Can Only Say What It Is in French
-1408
-Riding the Bullet
-Luckey Quarter

Whether writing about encounters with the dead, the near dead, or about the mundane dreads of life, from quitting smoking to yard sales, Stephen King is at the top of his form in the fourteen dark tales assembled in Everything’s Eventual. Intense, eerie, and instantly compelling, they announce the stunningly fertile imagination of perhaps the greatest storyteller of our time.

Stephen King is the author of more than sixty books, all of them worldwide bestsellers. His recent work includes If It Bleeds, The Institute, Elevation, The Outsider, Sleeping Beauties (cowritten with his son Owen King), and the Bill Hodges trilogy: End of Watch, Finders Keepers, and Mr. Mercedes (an Edgar Award winner for Best Novel and a television series streaming on Peacock). His novel 11/22/63 was named a top ten book of 2011 by The New York Times Book Review and won the Los Angeles Times Book Prize for Mystery/Thriller. His epic works The Dark Tower, It, Pet Sematary, and Doctor Sleep are the basis for major motion pictures, with It now the highest-grossing horror film of all time. He is the recipient of the 2020 Audio Publishers Association Lifetime Achievement Award, the 2018 PEN America Literary Service Award, the 2014 National Medal of Arts, and the 2003 National Book Foundation Medal for Distinguished Contribution to American Letters. He lives in Bangor, Maine, with his wife, novelist Tabitha King.