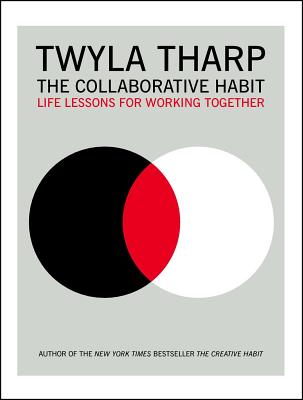 Twyla Tharp was born a Quaker, living in a community of Friends where families help each other. In her life as a dance choreographer, she continued to work closely with individuals and groups to create dances, working together professionally with dancers, assistants, audiences, and other choreographers. The story of her collaboration with Jerome Robbins stands out as particularly inspiring as their friendship survived the collaboration! In her book, she also tells stories of her work with Mikhail Baryshnikov, Elvis Costello, Billy Joel and Bob Dylan. Her main motivator has always remained her sense of quality. Twyla Tharp is truly an original thinker who believes that "In any collaboration, there is not one way. Go with whatever works." - Pinna

• An important and useful skill: In education, collaborative classroom learning is replacing head-to-head competition. In business, the best leaders are team-builders who can inspire great group efforts. Tharp uses her decades of experience to explain why teamwork is a superior way of working for some of us and inevitable for almost all of us. .

• The essential lessons of group effort: Tharp takes readers through the most common varieties of collaborations, including working with a partner, with institutions and middlemen, outside your expertise, in a virtual partnership, with a friend, with someone who outranks you, plus how to deal with toxic collaborators, and much more..

Twyla Tharp, one of America’s greatest choreographers began her career in 1965, and has created more than 130 dances for her company as well as for the Joffrey Ballet, the New York City Ballet, the Paris Opera Ballet, London’s Royal Ballet, Denmark’s Royal Ballet, and American Ballet Theatre. She has won two Emmy Awards for television’s Baryshnikov by Tharp, and a Tony Award for the Broadway musical Movin’ Out. The recipient of a MacArthur Fellowship, she was inducted into the American Academy of Arts & Sciences in 1993 and was made an honorary member of the American Academy of Arts and Letters in 1997. She holds nineteen honorary degrees, most recently from Harvard University. She lives and works in New York City.