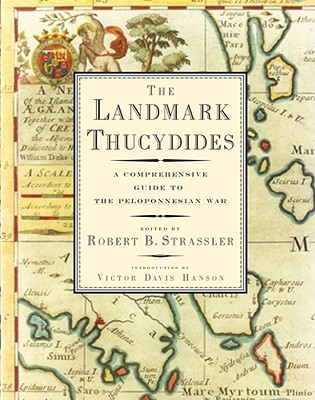 By Robert B. Strassler (Editor), Victor Davis Hanson (Introduction by)
$47.50

Thucydides called his account of two decades of war between Athens and Sparta “a possession for all time,” and indeed it is the first and still the most famous work in the Western historical tradition.

Considered essential reading for generals, statesmen, and liberally educated citizens for more than 2,000 years, The Peloponnesian War is a mine of military, moral, political, and philosophical wisdom.

However, this classic book has long presented obstacles to the uninitiated reader. Written centuries before the rise of modern historiography, Thucydides' narrative is not continuous or linear. His authoritative chronicle of what he considered the greatest war of all time is rigorous and meticulous, yet omits the many aids to comprehension modern readers take for granted—such as brief biographies of the story's main characters, maps and other visual enhancements, and background on the military, cultural, and political traditions of ancient Greece.

Robert Strassler's new edition amends these omissions, and not only provides a new coherence to the narrative overall but effectively reconstructs the lost cultural context that Thucydides shared with his original audience. Based on the venerable Richard Crawley translation, updated and revised for modern readers, The Landmark Thucydides includes a vast array of superbly designed and presented maps, brief informative appendices by outstanding classical scholars on subjects of special relevance to the text, explanatory marginal notes on each page, an index of unprecedented subtlety and depth, and numerous other useful features. Readers will find that with this edition they can dip into the text at any point and be immediately oriented with regard to the geography, season, date, and stage of the conflict.

In any list of the Great Books of Western Civilization, The Peloponnesian War stands near the top. This handsome, elegant, and authoritative new edition will ensure that its greatness is appreciated by future generations.

Robert B. Strassler is an unaffiliated scholar whose articles have appeared in the Journal of Hellenic Studies. He lives in Brookline, Massachusetts.

Victor Davis Hanson is a conservative commentator, classicist, and military historian. He has been a commentator on modern and ancient warfare and contemporary politics for The New York Times, Wall Street Journal, National Review, The Washington Times, and other media outlets.

"This is the best book with which to start study of Thucydides and the Peloponnesian War. It presents the finest English translation. Its maps, scholarly appendices, and notes permit the beginner to understand the text and to move easily and at once to a higher level of study than has been possible up to now." -- Donald Kagan, author of On the Origins of War and Pericles of Athens

"Reading Thucydides remains an indispensable part of a liberal education. But this text has been wanting a useful English language, annotated version that would make it easier for the contemporary reader to encounter its brilliance and eloquence. Strassler's meticulous and imaginative achievement is as welcome as it is astonishing. Students of history and politics will be forever in his debt." -- Leon Botstein President, Bard College

"At last readers of The Peloponnesian War can have at their fingertips the background information they need to read the narrative with understanding." -- W. Robert Connor Director, National Humanities Center

"Thucydides knew that human nature was unlikely to change over time, and it is this awareness that has allowed his work to be, as he hoped it would, a 'possession for all time.' But even he did not imagine how much warfare and customs would have changed over 2,500 years, or how the differences between past and present practices would make his work difficult for modern readers to follow. This new edition helps make Thucydides accessible once again by providing readers with the maps and detailed background information they will need to understand the full significance of his work." -- Mary Lefkowitz, Andrew Mellon Professor in the Humanities, Wellesley College