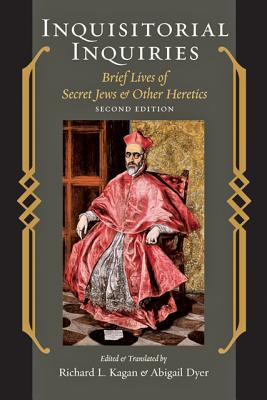 On the first day of Francisco de San Antonio's trial before the Spanish Inquisition in Toledo in 1625, his interrogators asked him about his parentage. His real name, he stated, was Abram Rub n, and he had been born in Fez of Jewish parents. How then, Inquisitors wanted to know, had he become a Christian convert? Why had a Hebrew alphabet been found in his possession? And what was his business at the Court in Madrid? He was asked, according to his dossier, for the story of his life. His response, more than ten folios long, is one of the many involuntary autobiographies created by the logic of the Inquisition that today provide rich insights into both the personal lives of the persecuted and the social, cultural, and political realities of the age.

In the first edition of Inquisitorial Inquiries, Richard L. Kagan and Abigail Dyer collected, translated, and annotated six of these autobiographies from a diverse group of prisoners. Now they add the fascinating life story of another victim of the Inquisition: Esteban Jamete, a French sculptor accused of being a Protestant. Each of the autobiographies has been selected to represent a particular political or social issue, while at the same time raising more intimate questions about the religious, sexual, political, or national identities of the prisoners. Among them are a politically incendiary prophet, a self-proclaimed hermaphrodite, and a morisco, an Islamic convert to Catholicism.

Richard L. Kagan is a professor of history at the Johns Hopkins University and author or editor of a number of books, including Clio and the Crown: The Politics of History in Medieval and Early Modern Spain and Atlantic Diasporas: Jews, Conversos, and Crypto-Jews in the Age of Mercantilism, 1500-1800, both also published by Johns Hopkins. Abigail Dyer received her Ph.D. from Columbia University and is an independent scholar living in New York.