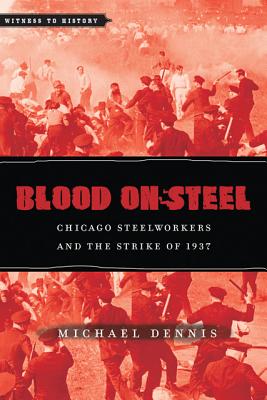 A pivotal moment in the history of the movement for working-class democracy, the "Memorial Day Massacre" vividly captured the conflicting ideals of workers' rights and the sanctity of private property.

On Memorial Day 1937, thousands of steelworkers, middle-class supporters, and working-class activists gathered at Sam's Place on the Southeast Side of Chicago to protest Republic Steel's virulent opposition to union recognition and collective bargaining. By the end of the day, ten marchers had been mortally wounded and more than one hundred badly injured, victims of a terrifying police riot. Sam's Place, the headquarters for the steelworkers, was transformed into a bloody and frantic triage unit for treating heads split open by police batons, flesh torn by bullets, and limbs mangled badly enough to require amputation.

While no one doubts the importance of the Memorial Day Massacre, Michael Dennis identifies it as a focal point in the larger effort to revitalize American equality during the New Deal. In Blood on Steel, Dennis shows how the incident--captured on film by Paramount newsreels--validated the claims of labor activists and catalyzed public opinion in their favor.

In the aftermath of the massacre, Senate hearings laid bare patterns of anti-union aggression among management, ranging from blacklists to harassment and vigilante violence. Companies were determined to subvert the right to form a union, which Congress had finally recognized in 1935. Only in the following year would Congress pass the Fair Labor Standards Act, which established a minimum wage and a maximum work week, outlawed child labor, and regulated hazardous work. Like the Wagner Act that protected collective bargaining, this law aimed to protect workers who had suffered the worst of what the Great Depression had inflicted.

Dennis's wide-angle perspective reveals the Memorial Day Massacre as not simply another bloody incident in the long story of labor-management tension in American history but as an illustration of the broad-based movement for social democracy which developed in the New Deal era.

Michael Dennis is a professor in the History and Classics Department at Acadia University in Nova Scotia and the author of Luther P. Jackson and a Life for Civil Rights and The New Economy and the Modern South.