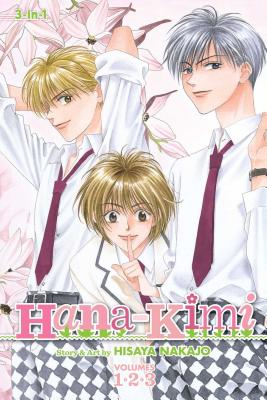 When someone asks me which series to start with if they're just getting into Japanese comics I always suggest Hana-Kimi. The series has become a classic both in Japan and in the US, and has spawned multiple television shows and radio dramas. It has a fantastic cast of likable characters, is heartfelt, and on occasion laugh-out-loud funny. Hana-Kimi has been, and will likely remain, my absolute favorite manga series. — From Amy's Picks (page 3)

The popular gender-bender romance is now reissued as a 3-in-1 omnibus Mizuki Ashiya has such a crush on a track star named Izumi Sano that she moves from the U.S. to Japan to enroll in the all-male high school he goes to Pretending to be a boy, Mizuki becomes Sano's roommate...but how can she keep such a big secret when she's so close to the guy she wants? Mizuki Ashiya is no slouch when it comes to a challenge. She's a star of track and field at her high school, after all. So when she falls for fellow athlete Izumi Sano, she figures out an ingenious plan to get close to him. Now she's moved to Japan, enrolled in the all-male high school Sano goes to, and become his roommate How? She's disguised herself as a boy Whatever happens next, things are about to get seriously complicated.

Hisaya Nakajo's manga series Hanazakari no Kimitachi he (For You in Full Blossom, casually known as Hana-Kimi) has been a hit since it first appeared in 1997 in the shojo manga magazine Hana to Yume (Flowers and Dreams). In Japan, a Hana-Kimi art book and several drama CDs have been released. Her other manga series include Missing Piece (two volumes) and Yumemiru Happa (The Dreaming Leaf, one volume).
My Account • Sign In • Sign Out • Register
NEW & USED BOOKS
AUTHOR EVENTS • GIFTS
Tempe
6428 South McClintock Drive
480.730.0205
[Google Map]
Sunday-Friday 10am-8pm
Saturday 9am-8pm
Trade Counter 11am-6pm daily