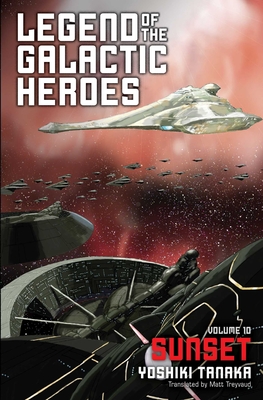 By Yoshiki Tanaka, Matt Treyvaud (Translated by)
$15.99
Not Available In-Store - Usually Ships from Warehouse in 1-5 Days

It’s the master tactician of the ruthless Galactic Empire versus the Free Planets Alliance in Japan’s greatest space opera epic!

Having taken his devoted confidant Hildegard von Lohengramm as his empress, Kaiser Reinhard awaits the birth of his heir. Much remains to trouble him, from the ongoing campaign of terror by Church of Terra diehards to the machinations of an erstwhile landesherr, and there are ominous signs that his own condition may be graver than anyone suspects. Nevertheless, it seems that peace has finally come to the New Galactic Empire. Meanwhile, in the Iserlohn Republic, Julian Mintz, successor to Yang the Magician, resolves to begin the first and final battle fought on the republic’s terms—the world-shaking conclusion to the Legend of the Galactic Heroes.

Yoshiki Tanaka was born in 1952 in Kumamoto Prefecture and completed a doctorate in literature at Gakushuin University. Tanaka won the Gen’eijo (a mystery magazine) New Writer Award with his debut story “Midori no Sogen ni…” (On the Green Field…) in 1978 and then started his career as a science fiction and fantasy writer. Legend of the Galactic Heroes: Dawn, which translates the European wars of the nineteenth century to an interstellar setting, won the Seiun Award for best science fiction novel in 1987. Tanaka’s other works include the fantasy series The Heroic Legend of Arslan and many other science fiction, fantasy, historical, and mystery novels and stories.
My Account • Sign In • Sign Out • Register
NEW & USED BOOKS
AUTHOR EVENTS • GIFTS
Tempe
6428 South McClintock Drive
480.730.0205
[Google Map]
10am-7pm daily
10am-5pm New Year's Eve
Closed New Year's Day