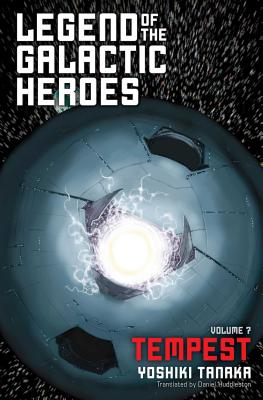 By Yoshiki Tanaka, Daniel Huddleston (Translated by)
$15.99
Not Available In-Store - Usually Ships from Warehouse in 1-5 Days

Reinhard, under his Golden Lion banner, is setting out to bend history and the universe to his will. Meanwhile, with no flag of their own to raise, Yang and his compatriots have escaped the murderous hands of the Free Planets Alliance's government and dubbed themselves the “Irregulars.” Yang receives word that an Imperial fleet is closing in on the capital of Heinessen, and in a daring move, recaptures Iserlohn Fortress. In the meantime, Reinhard’s invasion of the Free Planets Alliance proceeds steadily apace. Standing in the path of the Imperial fleet is a fleet of FPA Navy vessels commanded by the elderly Admiral Bucock. An old lion roars out a life-or-death challenge, and a young lion answers it—the final battle of the Free Planets Alliance now begins!

Yoshiki Tanaka was born in 1952 in Kumamoto Prefecture and completed a doctorate in literature at Gakushuin University. Tanaka won the Gen’eijo (a mystery magazine) New Writer Award with his debut story “Midori no Sogen ni…” (On the Green Field…) in 1978 and then started his career as a science fiction and fantasy writer. Legend of the Galactic Heroes: Dawn, which translates the European wars of the nineteenth century to an interstellar setting, won the Seiun Award for best science fiction novel in 1987. Tanaka’s other works include the fantasy series The Heroic Legend of Arslan and many other science fiction, fantasy, historical, and mystery novels and stories.
My Account • Sign In • Sign Out • Register
NEW & USED BOOKS
AUTHOR EVENTS • GIFTS
Tempe
6428 South McClintock Drive
480.730.0205
[Google Map]
10am-7pm daily
10am-5pm New Year's Eve
Closed New Year's Day