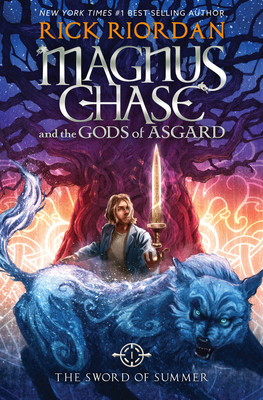 Magnus Chase has always been a troubled kid. Since his mother’s mysterious death, he’s lived alone on the streets of Boston, surviving by his wits, keeping one step ahead of the police and the truant officers.

One day, he’s tracked down by an uncle he barely knows—a man his mother claimed was dangerous. Uncle Randolph tells him an impossible secret: Magnus is the son of a Norse god.

Rick Riordan (www.rickriordan.com) is the author of three # 1 New York Times best-selling series with millions of copies sold throughout the world: Percy Jackson and the Olympians, the Kane Chronicles, and the Heroes of Olympus. His Greek myth collection, Percy Jackson’s Greek Gods, was a #1 New York Times bestseller as well. His previous novels for adults include the hugely popular Tres Navarre series, winner of the top three awards in the mystery genre. He lives in Boston, Massachusetts with his wife and two sons.

"The clash of modern and classical worlds is both exciting and entertaining."—<EM>The New York Times Book Review</EM>

PRAISE FOR THE BATTLE OF THE LABYRINTH

"Adventure fans will relish the action as their heroes confront formidable foes, while readers who have come to love the characters will enjoy following the different individuals as they take the stage in scenes that are usually dramatic, often witty, and occasionally surprising. A satisfying, penultimate entry in the Heroes of Olympus series." —<EM>Booklist Online</EM>

"In this adventure, victories are hard-won and the essence of bravery nuanced, making the journey as satisfying as it is entertaining."—<EM>Kirkus Reviews</EM>

PRAISE FOR THE LAST OLYMPIAN

"Riordan masterfully orchestrates the huge cast of characters and manages a coherent, powerful tale at once exciting, philosophical and tear-jerking. The bestselling series' legions of fans will cheer their heroes on and rejoice in such a compelling conclusion to the saga."—<EM>Kirkus Reviews</EM> (starred review)

PRAISE FOR THE LIGHTNING THIEF

"With a true storyteller’s sense of pacing, Riordan creates another compelling adventure, right down to the cliff-hanger at the end. Stay tuned for volume four."—<EM>Booklist</EM>

"With his now-trademark zero-to-60 acceleration, the author engineers a ghostly possession to set Greeks and Romans at odds and initiates the Prophecy of the Seven, hurtling Annabeth, Percy, Piper, Leo, Hazel, Frank and Jason into a pell-mell flight on the magical trireme Argo II. Here, Riordan’s infectious love for his subject matter really comes through, even as he takes some real risks with his characters. A literal cliffhanger leaves eager readers hanging; next stop: Greece—and Tartarus."—<EM>Kirkus Reviews</EM>

PRAISE FOR THE SEA OF MONSTERS

* “In a feat worthy of his heroic subjects, Riordan crafts a sequel stronger than his compelling debut.”
—<EM>Publishers Weekly</EM> (starred review)

PRAISE FOR THE SON OF NEPTUNE

“The Sword of Summer combines the glory of Norse myth with the joy of Rick Riordan’s effervescent world-building. One of Riordan’s funniest books—everything from the chapter titles to the wry humor of Magnus Chase will have you chuckling, even as the plot races along at breakneck speed. Check me in to Hotel Valhalla, please. I’ll be staying.”—<EM>New York Times</EM> #1 best-selling author Cassandra Clare

“Rick Riordan’s new series is simply brilliant—maybe his best yet! I thought I knew Norse mythology, but now that I’ve read the gripping and hilarious Sword of Summer, I’ll never see Thor the same way again. Get ready to stay up all night reading!”—<EM>New York Times</EM> #1 best-selling author Harlan Coben

PRAISE FOR THE TITAN'S CURSE

“All in all, a winner of Olympic proportions.”—<EM>School Library Journal</EM>