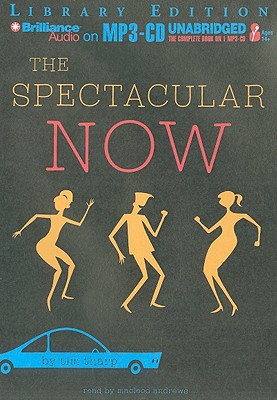 So, my girlfriend, Cassidy, is threatening to kick me to the curb again, my best friend suddenly wants to put the brakes on our lives of fabulous fun, my mom and big sister are plotting a future in which I turn into an atomic vampire, and my dad, well, my dad is a big fat question mark that I m not sure I want the answer to. Some people would let a senior year like this get them down. Not me. I m Sutter Keely, master of the party. But don t mistake a midnight philosopher like me for nothing more than a shallow party boy. Just ask Aimee, the new girl in my life. She saw the depth in the Sutterman from that first moment when she found me passed out on the front lawn. Okay, so she's a social disaster, but that's where I come in. Yes, life is weird, but I embrace the weird. Let everyone else go marching off into their great shining futures if they want. Me, I ve always been more than content to tip my whisky bottle and take a ride straight into the heart of the spectacular now. "A smart, superbly written novel. - Publishers Weekly, Starred.
My Account • Sign In • Sign Out • Register
NEW & USED BOOKS
AUTHOR EVENTS • GIFTS
Tempe
6428 South McClintock Drive
480.730.0205
[Google Map]
Sunday-Friday 10am-8pm
Saturday 9am-8pm
Trade Counter 11am-6pm daily