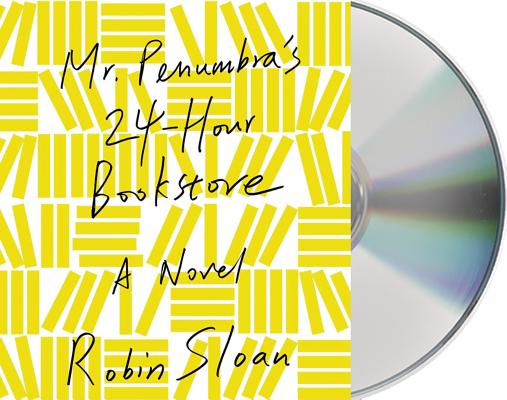 “Booksellers and book lovers alike will adore charming Mr. Penumbra and his towering stacks of mysterious, code-filled tomes, as well as the array of eccentric old men that make up the store's late-night clientele. I now want to keep a log of our bookshop's customers by Mr. Penumbra's criteria: 'You must keep precise records of all purchases. Time. Amount. The customer's appearance. His state of mind. How he asks for the book. How he receives it. Does he appear to be injured. Is he wearing a sprig of rosemary on his hat. And so on.' Wonderful!”
— Andrea Aquino, Bookshop Santa Cruz, Santa Cruz, CA

The Great Recession has shuffled Clay Jannon out of his life as a San Francisco Web-design drone—and serendipity, sheer curiosity, and the ability to climb a ladder like a monkey has landed him a new gig working the night shift at Mr. Penumbra's 24-Hour Bookstore. But after just a few days on the job, Clay begins to realize that this store is even more curious than the name suggests. There are only a few customers, but they come in repeatedly and never seem to actually buy anything, instead "checking out" impossibly obscure volumes from strange corners of the store, all according to some elaborate, long-standing arrangement with the gnomic Mr. Penumbra. The store must be a front for something larger, Clay concludes, and soon he's embarked on a complex analysis of the customers' behavior and roped his friends into helping to figure out just what's going on. But once they bring their findings to Mr. Penumbra, it turns out the secrets extend far outside the walls of the bookstore.

With irresistible brio and dazzling intelligence, Robin Sloan has crafted a literary adventure story for the twenty-first century, evoking both the fairy-tale charm of Haruki Murakami and the enthusiastic novel-of-ideas wizardry of Neal Stephenson or a young Umberto Eco, but with a unique and feisty sensibility that's rare to the world of literary fiction. Mr. Penumbra's 24-Hour Bookstore is exactly what it sounds like: an establishment you have to enter and will never want to leave, a modern-day cabinet of wonders ready to give a jolt of energy to every curious reader, no matter the time of day.

Robin Sloan grew up in Michigan and now splits his time between San Francisco and the Internet. He is the author of Mr. Penumbra's 24-Hour Bookstore and Sourdough.

Ari Fliakos is an actor with experience in television, radio, film, theater, and voiceovers. His narration of Seth Patrick’s Reviver won an Audie for paranormal fiction. He has narrated Black Site and Tier One Wild by Dalton Fury, as well as Gangster Squad, The Inquisitor, and Shotgun Lovesongs. On screen, he is best-known for his roles in Law & Order, Pills, and Company K.

“Robin Sloan has written this novel with rhythmic precision, and Ari Fliakos endows each of the characters with his or her own color and flavor. He makes believers of us all as Clay and his friends forge ahead on this fanciful journey – part mystery, part quest. We listen with delight and hope we can glimpse the future.” —AudioFile Magazine

“Ari Flaikos's narration convincingly captures the enthusiasm of the youthful narrator as well as the older Mr. Penumbra…Recommended for those seeking a light mystery that celebrates the digital age.” —Library Journal

“Ari Flaikos nails the young, tech-savvy, cynical Clay. However, Fliakos really shines when rendering the book's supporting cast. His take on Mr. Penumbra is so different from his portrayal of Clay that listeners might think a different actor performed it. Such is the case with nearly every character in this audio edition, all of whom Fliakos provides with distinct inflections, tones, and rhythms.” —Publishers Weekly, starred review

“Ari Fliakos does a fine job with MR. PENUMBRA. The novel is rife with obscure terminology drawing from a diverse wealth of linguistic sources, yet Fliakos makes few if any slips. His youthfully exuberant Clay and his tremulously throaty Mr. Penumbra fit the characters perfectly, as do the voices he selects for most of the other characters.” —SFF Audio

“It is most appropriate for a novel whose denouement involves an audiobook to appear in that form…Ari Fliakos takes on a range of voices to portray the seekers engages in penetrating the mysteries of an ancient volume… [An] engaging, newfangled quest.” —The Washington Post

“One of the most thoughtful and fun reading experiences you're likely to have this year . . . extremely charismatic . . . deeply funny . . . there's so much largehearted magic in this book . . . Sloan is remarkably gifted and has an obviously deep affection for both literature and technology.” —Michael Schaub, NPR Books

“A jaunty, surprisingly old-fashioned fantasy about the places where old and new ways of accessing knowledge meet . . . [Mr. Penumbra's 24-Hour Bookstore] cleverly uses the technological age in the service of its fantasy . . . Sloan's ultimate answer to the mystery of what keeps people solving Penumbra's puzzle is worth turning pages to find out.” —Tess Taylor, San Francisco Chronicle

“[A] winning literary adventure . . . Sloan grounds his jigsawlike plot with Big Ideas about the quest for permanence in the digital age.” —Thom Geier, Entertainment Weekly

“Fantastic . . . I loved diving into the world that Sloan created, both the high-tech fantasyland of Google and the ancient analog society. It's packed full of geeky allusions and wonderful characters, and is a celebration of books, whether they're made of dead trees or digits.” —Jonathan H. Liu, Wired, GeekDad

“Robin Sloan cleverly combines the antiquated world of bibliophilia with the pulsating age of digital technology, finding curiosity and joy in both. He makes bits and bytes appear beautiful . . . The rebels' journey to crack the code--grappling with an ancient cult, using secret passwords and hidden doorways--will excite anyone's inner child. But this is no fantasy yarn. Mr. Sloan tethers his story to a weird reality, striking a comical balance between eccentric and normal . . . The pages swell with Mr. Sloan's nerdy affection and youthful enthusiasm for both tangible books and new media. Clay's chatty narration maintains the pace and Mr. Sloan injects dry wit and comedic timing suited to his geeky everyman . . . A clever and whimsical tale with a big heart.” —The Economist

“Man, is this book fun--especially for any book nerd who isn't in denial about living in the modern age. If you love physical books (the smell! The feel!) but wouldn't give up your iPhone for any reason, if you like puzzles and geeky allusions and bookish cults and quests, then this book is for you. It also glows in the dark.” —Emily Temple, Flavorpill

“What makes Mr. Penumbra's 24-Hour Bookstore so impressive is Sloan's great gift for storytelling and his cast of brilliant, eccentric characters. Think of this novel as part Haruki Murakami, part Dan Brown and part Joseph Cornell: a surreal adventure, an existential detective story and a cabinet of wonders at which to marvel.” —Carmela Ciuraru, Newsday

“Beguiling . . . The plot is as tight as nesting boxes, or whatever their digital equivalent . . . Sly and infectious.” —Karen R. Long, The Cleveland Plain Dealer

“Sloan isn't just exploring new ideas, but laying the groundwork for a new genre of literature. While the influence of Neal Stephenson and William Gibson is present, Mr. Penumbra's 24-Hour Bookstore is something all its own: a technocratic adventure where every riddle and puzzle is solved with very real gadgets, a humanizing reflection on technology that evokes the tone of a fairy tale, a brisk and brainy story imbued with such confidence that it will leave you with nothing but excitement about the things to come.” —Kevin Nguyen, Grantland

“In a time when actual books are filling up tag-sale dollar boxes, along with VHS tapes and old beepers, Mr. Penumbra's 24-Hour Bookstore reminds us that there is an intimate, adventurous joy in the palpable papery things called novels, and in the warm little secret societies we used to call ‘bookstores.' Robin Sloan's novel is delightfully funny, provocative, deft, and even thrilling. And for reasons more than just nostalgia, I could not stop turning these actual pages.” —John Hodgman

“The love child of Erin Morgenstern's The Night Circus and Neal Stephenson's Reamde, Mr. Penumbra's 24-Hour Bookstore is a hugely enjoyable story of friendship, living, and the lure of the mysterious. It's a good-hearted, optimistic book about the meeting of modern technology and medieval mystery, a tonal road map to a positive relationship between the old world and the new. It's a book that gets it. Plus, you know: cryptographic cults, vertical bookshops, hot geeks, theft, and the pursuit of immortality. I loved it. And yes, I too would freeze my head.” —Nick Harkaway

“Robin Sloan is a skilled architect, and Mr. Penumbra's 24-Hour Bookstore is an ingeniously designed space, full of mysteries and codes. A clever, entertaining story that also manages to be a thought-provoking meditation on progress, information and technology. Full of intelligence and humor.” —Charles Yu

“Mr. Penumbra's 24-Hour Bookstore is a real tour de force, a beautiful fable that is given legs by the author's bravado use of the real (Google is in there, for instance, the actual campus) to sell us on a shadow world of the unreal and the speculative. Robin Sloan comes across as so bighearted, so in love with the world--the ancient world, the contemporary world--so in love with love, in love with friendship, in love with the idea that our technical abilities can serve as conduits for beauty, that the reader is swept along by his enthusiasm. It's a lot of fun--but it's also a powerful reading experience with a wonderful undeniability.” —George Saunders, in Blip Magazine