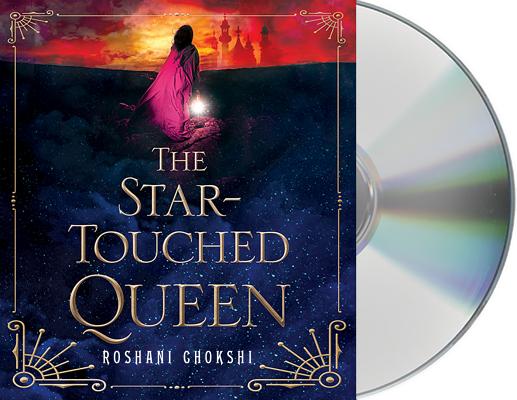 This is book number 1 in the Star-Touched series.

This the the fantasy story I’ve been waiting for. It’s so different than anything out there right now and if the writing doesn’t blow you away, the Indian mythology, secret pasts, and magic worlds will. Cursed with a horoscope of death, Maya is alone and feared in her own home. Her world changes when she meets Amar and is taken to the Otherworld where she learns her destiny and finds there's more to her curse than she thought.

A lush and vivid story steeped in Indian folklore and mythology, Roshani Chokshi's The Star-touched Queen is a novel that no listener will soon forget. An instant New York Times bestseller!

Fate and fortune. Power and passion. What does it take to be the queen of a kingdom when you're only seventeen?

Maya is cursed. With a horoscope that promises a marriage of Death and Destruction, she has earned only the scorn and fear of her father's kingdom. Content to follow more scholarly pursuits, her whole world is torn apart when her father, the Raja, arranges a wedding of political convenience to quell outside rebellions. Soon Maya becomes the queen of Akaran and wife of Amar. Neither roles are what she expected: As Akaran's queen, she finds her voice and power. As Amar's wife, she finds something else entirely: Compassion. Protection. Desire...

But Akaran has its own secrets -- thousands of locked doors, gardens of glass, and a tree that bears memories instead of fruit. Soon, Maya suspects her life is in danger. Yet who, besides her husband, can she trust? With the fate of the human and Otherworldly realms hanging in the balance, Maya must unravel an ancient mystery that spans reincarnated lives to save those she loves the most... including herself.

Roshani Chokshi is the author of commercial and critically acclaimed books for middle grade and young adult readers that transport audiences to fantastical worlds heavily inspired by world mythology and folklore. Her work has been nominated for the Locus and Nebula awards, and has frequently appeared on Best of The Year lists from Barnes and Noble, Buzzfeed and more. Her New York Times bestselling series includes The Star-Touched Queen duology, The Gilded Wolves, and Aru Shah and The End of Time, which was recently optioned for film by Paramount Pictures.

"The author delivers a beautiful book to her readers. The story weaves together the true emotions of a young woman struggling to figure out her own strength with the richness of Indian mythology. If you love a good story or are addicted to myths and legends...this book is truly a must read." -Victoria, ArtBooksCoffee.com

"As soon as I finished this book I wanted to jump up and scream YES! This is what more YA should be like. It has originality. It has depth." -BiblioSanctum.com