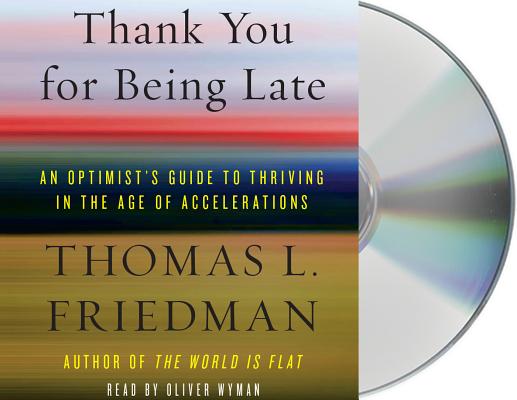 Version 2.0, Updated and Expanded, with a New Afterword

We all sense it—something big is going on. You feel it in your workplace. You feel it when you talk to your kids. You can’t miss it when you read the newspapers or watch the news. Our lives are being transformed in so many realms all at once—and it is dizzying.

In Thank You for Being Late, version 2.0, with a new afterword, Thomas L. Friedman exposes the tectonic movements that are reshaping the world today and explains how to get the most out of them and cushion their worst impacts. His thesis: to understand the twenty-first century, you need to understand that the planet’s three largest forces—Moore’s law (technology), the Market (globalization), and Mother Nature (climate change and biodiversity loss)—are accelerating all at once. These accelerations are transforming five key realms: the workplace, politics, geopolitics, ethics, and community. The year 2007 was the major inflection point: the release of the iPhone, together with advances in silicon chips, software, storage, sensors, and networking, created a new technology platform that is reshaping everything from how we hail a taxi to the fate of nations to our most intimate relationships. It is providing vast new opportunities for individuals and small groups to save the world—or to destroy it.

With his trademark vitality, wit, and optimism, Friedman shows that we can overcome the multiple stresses of an age of accelerations—if we slow down, if we dare to be late and use the time to reimagine work, politics, and community. Thank You for Being Late is an essential guide to the present and the future.

Thomas L. Friedman is an internationally renowned author, reporter, and columnist-the recipient of three Pulitzer Prizes and the author of six bestselling books, among them From Beirut to Jerusalem and The World Is Flat.

He was born in Minneapolis in 1953, and grew up in the middle-class Minneapolis suburb of St. Louis Park. He graduated from Brandeis University in 1975 with a degree in Mediterranean studies, attended St. Antony's College, Oxford, on a Marshall Scholarship, and received an M.Phil. degree in modern Middle East studies from Oxford. After three years with United Press International, he joined The New York Times, where he has worked ever since as a reporter, correspondent, bureau chief, and columnist. At the Times, he has won three Pulitzer Prizes: in 1983 for international reporting (from Lebanon), in 1988 for international reporting (from Israel), and in 2002 for his columns after the September 11th attacks.

Friedman's first book, From Beirut to Jerusalem, won the National Book Award in 1989. His second book, The Lexus and the Olive Tree: Understanding Globalization (1999), won the Overseas Press Club Award for best book on foreign policy in 2000. In 2002 FSG published a collection of his Pulitzer Prize-winning columns, along with a diary he kept after 9/11, as Longitudes and Attitudes: Exploring the World After September 11. His fourth book, The World Is Flat: A Brief History of the Twenty-first Century (2005) became a #1 New York Times bestseller and received the inaugural Financial Times/Goldman Sachs Business Book of the Year Award in November 2005. A revised and expanded edition was published in hardcover in 2006 and in 2007. The World Is Flat has sold more than 4 million copies in thirty-seven languages.

In 2008 he brought out Hot, Flat, and Crowded, which was published in a revised edition a year later. His sixth book, That Used to Be Us: How American Fell Behind in the World We Invented and How We Can Come Back, co-written with Michael Mandelbaum, was published in 2011.

Thomas L. Friedman lives in Bethesda, Maryland, with his family.

Oliver Wyman, a native New Yorker, has appeared on stage as well as in film, and television. He is one of the founders of New York City's Collective Unconscious theater, and his performances include the award-winning “reality play” Charlie Victor Romeo and A.R. McElhinney's cult classic film A Chronicle of Corpses. He also lent his voice to several episodes of the Teenage Mutant Ninja Turtles. Oliver's work as a narrator extends to over 150 audiobooks and has won many him awards, including Audie awards for his reading of Lance Armstrong's autobiography, It's Not About the Bike, and Thomas L. Friedman's The World is Flat. He also read James Frey's A Million Little Pieces, Tim Dorsey's Atomic Lobster, and David Weber's By Schism Rent Asunder. Oliver has won five Audie Awards from the Audio Publisher's Association, fourteen Earphone Awards from AudioFile Magazine, and two Listen Up Awards from Publisher's Weekly. Oliver was named a 2008 Best Voice in Nonfiction & Culture by AudioFile Magazine.

"Wyman keeps to a steady drive and an energetic projection that hold listeners' attentions." - AudioFile Magazine

One of The Wall Street Journal's "10 Books to Read Now"

One of the Best Nonfiction Books of 2016, Kirkus Reviews

One of the Most Anticipated Books of Fall 2016, Publishers Weekly

"Thomas L. Friedman is a self-­confessed 'explanatory journalist'—whose goal is to be a 'translator from English to English.' And he is extremely good at it . . . it is hard to think of any other journalist who has explained as many complicated subjects to so many people . . . Now he has written his most ambitious book—part personal odyssey, part commonsense manifesto . . . As a guide for perplexed Westerners, this book is very hard to beat." —John Micklethwait, The New York Times Book Review

"[An] ambitious book . . . In a country torn by a divisive election, technological change and globalization, reconstructing social ties so that people feel respected and welcomed is more important than ever . . . Rather than build walls, [healthy communities] face their problems and solve them. In [Friedman's] telling, this is the way to make America great." —Laura Vanderkam, The Wall Street Journal

"Engaging . . . in some senses Thank You For Being Late is an extension of [Friedman's] previous works, woven in with wonderful personal stories (including admirably honest discussions about the nature of being a columnist). What gives Friedman’s book a new twist is his belief that upheaval in 2016 is actually far more dramatic than earlier phases . . . Friedman also argues that Americans need to discover their sense of 'community,' and uses his home town of Minneapolis to demonstrate this." —Gillian Tett, Financial Times

"[A] humane and empathetic book." —David Henkin, The Washington Post

"[Friedman's] latest engrossingly descriptive analysis of epic trends and their consequences . . . Friedman offers tonic suggestions for fostering 'moral innovation' and a commitment to the common good in this detailed and clarion inquiry, which, like washing dirty windows, allows us to see far more clearly what we’ve been looking at all along . . . his latest must-read." —Booklist (starred review)

"The three-time Pulitzer winner puts his familiar methodology—extensive travel, thorough reporting, interviews with the high-placed movers and shakers, conversations with the lowly moved and shaken—to especially good use here . . . He prescribes nothing less than a redesign of our workplaces, politics, geopolitics, ethics, and communities . . . Required reading for a generation that's 'going to be asked to dance in a hurricane.'" —Kirkus Reviews (starred review)