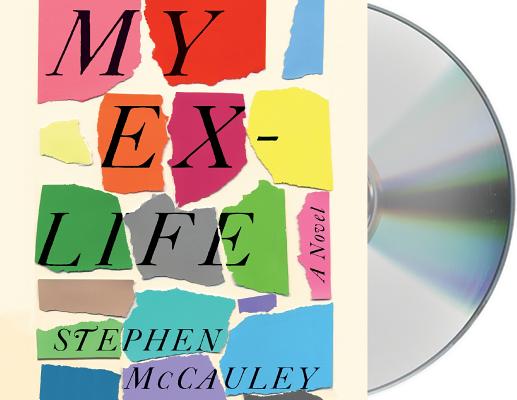 In today's crazy world, occasionally we need a book that makes us feel good about human beings. The characters in McCauley's novel are flawed but for the most part lovable and attempting to find their places in a world that is filled with bumps and old heartache and betrayal. They are funny, their conversations ones that you want to be a part of and they speak to the human condition--a search for love, a need for deep friendships that weather the years, for a sense of place, and enough money to make this happen. McCauley is a master of dialogue and he's witty, perceptive and compassionate. I needed this book in my life and when it was finished, I smiled.

“This story of loves both great and small is most certainly not saccharine sweet. My Ex-Life reminds us that there is a reason for everything, and that sometimes it's wise to go back to the familiar (albeit old) parts of ourselves to remind us just how far we've come. Stephen McCauley writes like your best friend - the one who always says what you're thinking but you'd never have the guts to utter out loud. His perception of even the mundane tasks of life reveals a witty tone dripping with self deprecation and amusement. This book is most certainly one you should put at the top of your to-be-read pile!”
— Jordan Arias, Anderson's Bookshop, Naperville, IL

From Stephen McCauley comes a long-anticipated audiobook about love, life, and friendship.

David Hedges’s life is coming apart at the seams. His job helping San Francisco rich kids get into the colleges of their (parents’) choice is exasperating; his younger boyfriend has left him; and the beloved carriage house he rents is being sold. His solace is a Thai takeout joint that delivers 24/7.

The last person he expects to hear from is Julie Fiske. It’s been decades since they’ve spoken, and he’s relieved to hear she’s recovered from her brief, misguided first marriage. To him.

Julie definitely doesn’t have a problem with marijuana (she’s given it up completely, so it doesn’t matter if she gets stoned almost daily) and the Airbnb she’s running out of her seaside house north of Boston is neither shabby nor illegal. And she has two whole months to come up with the money to buy said house from her second husband before their divorce is finalized. She’d just like David’s help organizing college plans for her 17-year-old daughter.

That would be Mandy. To quote Barry Manilow, Oh Mandy. While she knows she’s smarter than most of the kids in her school, she can’t figure out why she’s making so many incredibly dumb and increasingly dangerous choices?

When David flies east, they find themselves living under the same roof (one David needs to repair). David and Julie pick up exactly where they left off thirty years ago—they’re still best friends who can finish each other’s sentences. But there’s one broken bit between them that no amount of home renovations will fix.

In prose filled with hilarious and heartbreakingly accurate one-liners, Stephen McCauley has written an audiobook that examines how we define home, family, and love. Be prepared to laugh, shed a few tears, and have thoughts of your own ex-life triggered. (Throw pillows optional.)

This program includes a bonus interview with the author.

"With My Ex-Life, a heartwarming comedy of manners about second chances and starting afresh, [Stephen McCauley] has pretty much outdone himself...McCauley fires off witticisms like a tennis ace practicing serves...In the vein of inveterate beguilers like Laurie Colwin, Elinor Lipman, and Maria Semple, McCauley is warm but snappy, light but smart — and just plain enjoyable." — NPR

Stephen McCauley is the author of The Object of My Affection, True Enough, and Alternatives to Sex. Many of his books have been national bestsellers, and three have been made into feature films. The New York Times Book Review dubbed McCauley “the secret love child of Edith Wharton and Woody Allen”, and he was named a Chevalier in the Order of Arts and Letters by the French Ministry of Culture. His fiction, reviews, and articles have appeared in the New York Times, the Washington Post, Harper’s, Vogue, and many other publications. He currently serves as Co-Director of Creative Writing at Brandeis University. He has several properties listed on Airbnb in Massachusetts and New York and owns a total of zero toss pillows.