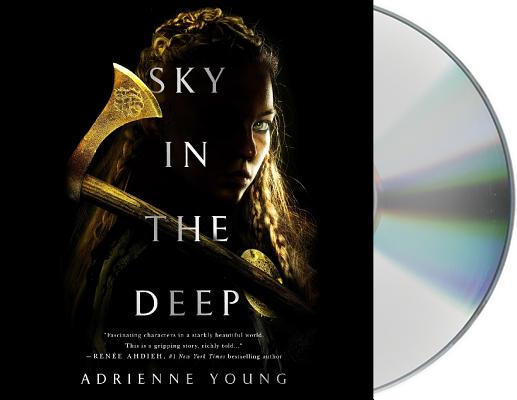 By Adrienne Young, Khristine Hvam (Read by)
$39.99
Email or call for price.

This is book number 1 in the Sky and Sea series.

“Sky in the Deep is the YA fantasy I’ve been waiting for — a breath of fresh air that holds the reader captive from the opening scene. Be warned, you will fall hard for Eelyn and Fiske. You will swoon, you will gasp, you will laugh, and you will cry; this book touches on all the emotions. In a brutal, bloody world, Young pulls no punches when putting the characters in intense situations that leave the reader on the edge of their seat. With lush descriptions, impactful character development, and powerful writing, this debut author will have you clamoring for more of her words.”
— Sarah Green, Vero Beach Book Center, Vero Beach, FL

"Fearless in its exploration of family, forgiveness, loyalty, and love, Sky in the Deep is fierce, vivid, and violently beautiful. This book will wage a war with your heart as brutal and as bold as the battles inked in its pages." - Stephanie Garber, New York Times Bestselling author of Caraval

In her highly-anticipated debut audiobook, Adrienne Young brings to life a lush, vivid world that will enchant listeners everywhere. Sky in the Deep is mythic in scope and speaks straight to the heart.

Raised to be a warrior, seventeen-year-old Eelyn fights alongside her Aska clansmen in an ancient, rivalry against the Riki clan. Her life is brutal but simple: train to fight and fight to survive. Until the day she sees the impossible on the battlefield—her brother, fighting with the enemy—the brother she watched die five years ago.

Eelyn loses her focus and is captured. Now, she must survive the winter in the mountains with the Riki, in a village where every neighbor is an enemy, every battle scar possibly one she delivered. But when the Riki village is raided by a ruthless clan settling in the valley, Eelyn is even more desperate to get back to her beloved family.

She is given no choice but to trust Fiske, her brother’s friend. They must do the impossible: unite the clans to fight together, or risk being slaughtered one by one. Driven by a love for her clan and her growing love for Fiske, Eelyn must confront her own definition of loyalty and family to find a way to forgive her brother while daring to put her faith in the people she’s spent her life hating.

More praise for Sky in the Deep:

"Young’s often poetic writing forms a stark juxtaposition with her vivid descriptions of battle and bloodshed, creating a clear picture of the brutality of war." — Publishers Weekly

"Young’s staccato prose matches her fierce fighters, but the raw emotions and rapid pacing belie a well-honed voice and taut narrative. A rousing saga and moving coming-of-age tale, perfect for those who appreciate the wild and the wildlings, strong female protagonists, and cinematic battles." — Kirkus

Adrienne Young is a foodie with a deep love of history and travel and a shameless addiction to coffee. When she’s not writing, you can find her on her yoga mat, sipping wine over long dinners or disappearing into her favorite art museums. She lives with her documentary filmmaker husband and their four little wildlings in the Blue Ridge Mountains of North Carolina. She is the author of the New York Times bestselling Sky in the Deep duology and the Fable duology.